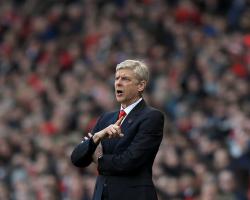 The Gunners moved back into the top four of the Barclays Premier League on Saturday with a hard-earned 2-1 win at Crystal Palace, where they survived a late onslaught and saw a header from Eagles substitute Glenn Murray come back off the post in the dying moments of stoppage time.

Arsenal, who stand third after Southampton lost 2-0 to Liverpool in Sunday's late game following on from Saturday's defeat for Manchester United at Swansea, have little time to recover energy levels before lifting themselves ahead of the European tie against Monaco, the first leg of which is at the Emirates Stadium on Wednesday night.

Wenger, though, is confident his squad are now showing they do indeed have what is needed to last the distance on all fronts.

"The spirit is there and we want to keep that as a very strong basis, the team has come up a level and we will see that with the results," said Wenger.

The Arsenal manager warned there can be no sense of complacency when they tackle Monaco, who topped Champions League Group C and won 1-0 at Nice on Friday night to maintain their own domestic top-four challenge.

"The last 16 in recent years has been super tough

This is a 50/50 game," said Wenger, who is set to face the club he guided to the 1988 Ligue 1 title in a competitive fixture for the first time.

Of course it will be tricky, but a possible tie.

They came back into a good position in the league and their confidence level will be high."

Wenger also led Monaco to success in the 1991 Coupe de France before reaching the 1992 European Cup Winners' Cup final and then the semi-finals of the Champions League in 1994.

Despite all of the nostalgia connected with the European tie, Wenger, who left Monaco the following year to take over at Nagoya Grampus in Japan, insists his sole focus had been on getting the needed result at Selhurst Park.

"I have enough experience to know that the most important game is this one, after, you think about the next one, so it has not been hard," said the 65-year-old, installed as Arsenal manager in October 1996.

"We fought like mad to come back in a strong position in the (Premier League), and not to win (against Palace) would have been disastrous."

Wenger must decide whether to change a winning side for the European tie, with both England internationals Jack Wilshere, fit again following ankle surgery, and Theo Walcott having watched on from the bench at Palace.

Goalkeeper Wojciech Szczesny may also be in line for a recall, with David Ospina having suffered a back problem during the second half after coming out to make an acrobatic headed clearance, which later led to a stoppage in play for treatment to the Colombian.