Wenger- We can win title 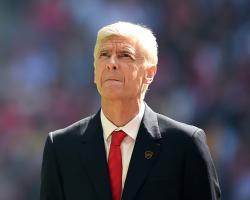 The Gunners have enjoyed a strong pre-season campaign which culminated in a 1-0 Community Shield victory over Chelsea at Wembley on Sunday.

Petr Cech is the only summer arrival at north London this summer, but despite Thierry Henry's suggestion that they need a striker in Benzema's class to compete in the title race, Wenger said he believes his current squad is good enough to bridge what was a 12-point gap to Chelsea last season

Asked if he feels his squad can with the title, Wenger, speaking ahead of his side's opener against West Ham at the Emirates Stadium on Sunday, said: "I believe yes, all going well, and us maintaining our game

"That's important as well - that we develop what we do well and do not stand still.

"That means we develop our cohesion, our passing game

If we are capable to keep the cohesion and the solidarity we have at the moment through the 38 games, we have a good chance."

When he was asked about ongoing speculation regarding France striker Benzema, Wenger added: " It is just media talk

"At the moment we have no (Alexis) Sanchez, no (Danny) Welbeck, and when these players come back we feel we have the needed striking force

But we do not rule it out if something exceptional comes up to do it."

Wenger conceded that Chelsea will start as the title favourites, but the Frenchman highlighted the importance of a strong opening to their campaign after last season's stuttering start

"Chelsea won it by a margin last year so they are the favourites," he said

"After that let's see how it goes

After 15 games you will know more about that

"Last year after 12 games we were 15 points behind Chelsea, and in the next 26 we took 58 points and Chelsea 55, so that means we missed our start to the season because it was after the World Cup

So let's start strong this season and I believe we have the needed ingredients."

Wenger will be missing Sanchez - who has only recently returned to training following Chile's exploits in the Copa America - Welbeck, Tomas Rosicky, and Jack Wilshere for Sunday's opener

Wilshere suffered a hairline fracture to his left fibula, but Wenger believes the England international could be back in action in four weeks

"Jack is of course down but the good news yesterday helped him to cope with it," said Wenger after it was initially feared he faced up to two months on the sidelines

"He just needs time to heal

"When you play football you never get used to your body letting you down, but the positive thing in this injury is that it's not a recurrence of one of his former injuries."

Although Wenger was in a positive mood ahead of the new campaign, he took a swipe at the decision to start this season's Premier League one week earlier

"It is completely unexplainable and a decision once again that on the technical side we were not consulted at all."