Wenger- We cannot get complacent 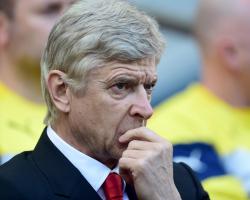 The Blues head to the Emirates Stadium on course for the title, some 10 points ahead of the Gunners with just six matches left to play.

While defeat for Jose Mourinho's men would probably not derail that journey from its final destination, the Gunners could be back down to fourth place by the time they kick off on Sunday afternoon should both Manchester City and Manchester United win, albeit still holding a match in hand following last weekend's FA Cup semi-final.

"We want to continue to win and strengthen our position in second place because that's far from being done," said Wenger, whose side have recorded eight straight Premier League victories.

"We have an opportunity to get closer to Chelsea and we want to take it.

"We dropped points at the start of the season, but since January we have been top of the [form] table.

"We have an opportunity to show that improvement is consistent."

Wenger accepts Chelsea have found the needed formula throughout this season.

The Premier League rewards the consistency and on that front, if you look at their record, they have been defensively very strong and very consistent," he said.

For all of Arsenal's progress in 2015, Wenger knows you are only as good as your last result.

Nothing is forever in our game," he said.

"Our game is so popular because it is not always predictable, and that is why even if you finish first this season you can be three or four places behind next season."

Jack Wilshere has recovered from ankle surgery and is hoping to play his part in the run-in, which will culminate on May 30 in the FA Cup final against Aston Villa at Wembley.

The midfielder has been impressed by Arsenal's new-found discipline in getting positive results against the divisions leading sides.

"There is this confidence or belief that we can do it and that is something different this season."