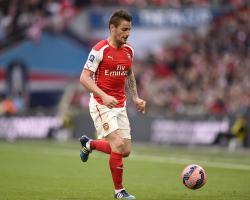 The Gunners still face a battle to secure second place in the Barclays Premier League and could be back down to fourth this weekend should results go against them before they kick off at Hull on Monday night.

Despite the frustrations of not being able to beat leaders Chelsea following a goalless draw at the Emirates Stadium last Sunday, Arsenal - who hold matches in hand on their rivals - head to East Yorkshire in decent form, with just two league defeats in 2015.

Full-back Mathieu Debuchy is struggling with a "little hamstring problem" following his return to action after shoulder surgery, while captain Mikel Arteta is set to step up his training this week and midfielder Alex Oxlade-Chamberlain is another continuing rehabilitation.

Otherwise, Wenger has plenty of options, which is something of a rare commodity given Arsenal's track record on injuries, but allowed the manager to select the likes of England quartet Kieran Gibbs, Jack Wilshere, Theo Walcott and Danny Welbeck all as substitutes for the Chelsea match.

"We are at a period of the season where it is going to be important to have everybody on board and to see everyone fit makes us stronger," Wenger said on the club's official website, www.arsenal.com.

"We are on a good run, we want to keep it going and the fact that we have plenty of [selection] opportunities is very interesting for me."

Forward Olivier Giroud believes the competition for places can only keep the squad on their toes over the run-in, which will culminate in the FA Cup final against Aston Villa at Wembley on May 30.

"We had a lot of injuries in the season and missed a lot of players, but now I think we are all at the boss' discretion and he can pick the best team at the end of the week," said Giroud, who was out for the best part of three months earlier in the campaign with a broken leg.

"That is good news for him and for us because everybody is ready.

"It is efficient and competitive and that is what we need to reach our target."

Giroud, quoted in the London Evening Standard, added: "We need competition between us so everybody gives their best in training, so that's why I think we are on a really strong run.

"We are maybe all in our best form at the same moment."