Wenger- Were not striker light 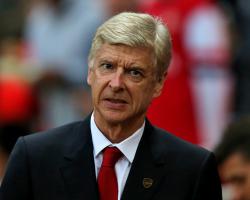 Giroud has been ruled out until the new year with a broken tibia, robbing the Gunners of their first-choice marksman in a position where they are short of established cover.

Wenger admits he will be monitoring the transfer market until the window closes on Monday and is willing to spend if the right player becomes available.

But the Frenchman, responding to the widely-held belief that Arsenal will fade from contention unless they strengthen up front, claims he is not in a position where he must buy.

"Of course we can be successful

Why not? The success of the season does not depend on one player that you buy or not," Wenger said.

"If I give you the number of strikers we have at the moment, it's absolutely unbelievable

"Giroud will be back during the season and Joel Campbell can play centre-forward as well.

"You sign players when you think it strengthens your squad

If you find the right player, then you want to do it.

"We've shown in the last two seasons that when we think money has to be spent, we do it

But we want to do it in the right way.

"I will be on alert until the last minute of the transfer deadline."

Former England striker Gary Lineker stated on Thursday that Arsenal must add firepower if they are to win major silverware as Â£35million signing Sanchez, who started as the lone striker against Everton and Besiktas, is more suited a wider role.

"We live in a society of opinions," Wenger said.

"People are better informed these days

Many of them are better informed than I am

But all of these opinions don't mean people are right.

"Everyone is entitled to an opinion, but that doesn't mean it's right.

"In fact, when opinions have been wrong in the past, people have never come out and say 'sorry I was wrong' - the easiest thing is to have an opinion."

Wenger believes if any suitable targets become available, his experience of doing business on deadline day should prove helpful.

Twelve months ago Mesut Ozil completed a late Â£42.4million move from Real Madrid and two years prior to that Mikel Arteta was among three players signed in a last-gasp flurry of deals.

"It's harder to buy top, top players because many clubs are in the market and everybody knows each other," Wenger said.

There are a lot of lies there and everyone is interested in the same player, even if you're the only one who wants the player.

"Of course (having experience of operating late in the window helps)

You can call it bluff when it's bluff."

Having qualified for the group stage of the Champions League on Wednesday night, Arsenal resume their Premier League campaign at promoted Leicester on Sunday.

Wenger recalls his visit to the Foxes in 1997 early in his Gunners reign when Dennis Bergkamp scored a hat-trick in a remarkable 3-3 draw.

"I remember the first sensational goal with Dennis Bergkamp

Many times I have said that that goal is one of the greatest goals I've seen in my career," Wenger said.

"It was also my first experience with Ian Wright - he didn't understand why I took him off.

"I wanted to spare him some minutes at the end of the game, but Wright was always keen to play."