Wenger will be backed in window 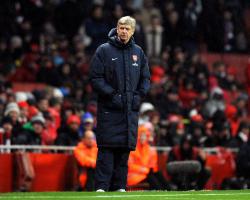 The Gunners confirmed their worst fears late on Monday following tests and specialist consultations, which revealed the 24-year-old would need surgery following anterior cruciate ligament damage sustained when making a defensive tackle during the closing stages of the third-round FA Cup win over Tottenham at the Emirates Stadium.

The club have rallied behind Walcott, who is expected to undergo an operation next week once the swelling on his left knee has eased, with messages of support flooding in from fans and fellow professionals alike.

Wenger, though, must immediately turn his attention to accommodating for the loss of Walcott, who was a potent weapon in the Arsenal attack and had netted five goals since his return from a stomach injury.

Forward options for the Barclay Premier League leaders were already depleted, as Nicklas Bendtner will need several weeks to fully recover from the ankle injury he picked up while scoring a late goal in the 2-0 win over Cardiff on New Year's Day, while France Under-21 international Yaya Sanogo, a free summer signing, has only now stepped up his rehabilitation from a back problem.

Olivier Giroud missed the Spurs match because of illness after shaking off a minor ankle injury, and remains Arsenal's lead attacker.

While the loss of Walcott is clearly a blow, the emergence of German 18-year-old Serge Gnabry, who set up the opening goal against Spurs, and imminent return to full fitness of Alex Oxlade-Chamberlain at least give Wenger some ready-made cover on the right side.

However, how best to offer direct support to French striker Giroud will now be key for Wenger as Arsenal look to last the distance in the race for honours through to May.

Fit-again Lukas Podolski offers another option, although the German striker was somewhat subdued when deployed in a central role against Cardiff, while club-record signing Mesut Ozil can provide telling back-up behind the main forward.

Although Wenger concedes a big-money signing during January is notoriously difficult to push through, Press Association Sport understands American owner Kroenke and the rest of the board would sanction raiding some of the club's substantial cash reserves should the manager identify the right calibre of player.

Atletico Madrid frontman Diego Costa certainly fits that bill having impressed in La Liga, but would also come with a hefty Â£32million-plus price tag even if the Spanish club - who are joint top of the table and in the last 16 of the Champions League - were to consider selling, which appears unlikely.

Although Wenger appeared to play down the possibility, veteran Fulham forward Dimitar Berbatov would provide a cut-price short-term solution, with the former Tottenham and Manchester United man likely to be available for under Â£5million if the Cottagers were open to offers. Lazio's Miroslav Klose, 35, would also provide the experienced cover required, with the German forward out of contract in the summer.

Promising 21-year-old Alvaro Morata is another stop-gap loan option, although Real Madrid have always maintained a reluctance to let him leave despite somewhat limited current first-team opportunities at the Bernabeu.

Walcott, meanwhile, will be given all the support needed as he begins what is expected to be a long road back to full match-fitness.

Former Arsenal goalkeeper Bob Wilson revealed the 24-year-old was remaining positive, despite the double blow of also now missing out on the chance to play for England at the World Cup finals in Brazil.

"I did text him to say how well he played (against Tottenham) and that we were thinking of him and - as you'd expect because he's such a good guy - I got a very, very positive response," Wilson said on Sky Sports News.

"It wasn't a long message, but the main line coming through was 'I will get through this'.

"He is a positive lad still in his early 20s, and you think of Aaron Ramsey with the career-threatening injury he had (a broken leg in 2010) and how well he has come through.

"I know the treatment he will get and all the positivity he has. We wish him well."