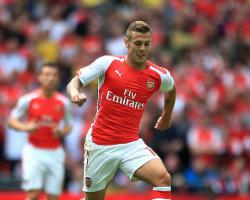 Former England and Manchester United star Paul Scholes has been the most outspoken in questioning why Wilshere's development has stalled since making his debut in 2008.

The 22-year-old issued the perfect response against the Barclays Premier League champions, reacting to Sergio Aguero's opener by lobbing Joe Hart before teeing up a sublime volley for Alexis Sanchez.

Martin Demichelis' late header salvaged a 2-2 draw for City, but it was the dynamic Wilshere who really caught the eye.

"The best place to answer critics is on the pitch," said Wenger, who was forced to defend the unimpressive Mesut Ozil once again.

"That's what Jack did, but I don't believe we can explain his good performance through the criticism of Paul Scholes.

You have accept criticism, go on the pitch and show you have the talent.

"The most important thing is to go show how good you are.

I'm very happy with that way he finished.

Debate has raged over Wilshere's best position with Scholes highlighting the uncertainty before Saturday's Emirates Stadium showdown in his role as analyser for BT Sport.

But Scholes was greeted by an irrepressible display that argued a watertight case for being involved in the advanced role favoured by Wilshere and Wenger.

That's why I prefer him to play higher up the pitch," Wenger said.

"One of his qualities is penetrating in the final third, but I'm not against him being defensive

He can do both because he is a good footballer.

"For a long time he didn't kick the ball well because of his ankle injury.

"The big difference now is that he stays on the feet, whereas before for a while when he was not as confident to push on his ankle he would go down.

"Now he has that solid aspect to the game he had before he was injured."

Wilshere took the diplomatic line by stating he is happy in either midfield role, but his words also made his preference clear.

It was Wilshere's first goal since January and the Arsenal academy product admits he needs to be more prolific.

"I want to score more goals and my goalscoring record hasn't been good enough," Wilshere added.

"In the formation we play I should be scoring more goals

We play with one holding and two going forward and I'm the one who gets forward.

Hopefully that will be one of many."

"They have definitely made progress

They are a better side

They have more quality all over the pitch," Kompany said.

"Obviously they played well but they didn't have too many clear-cut chances.

"They didn't need too many to score twice, which is the sign of a strong team."