Wenger- Wilshere will be ready 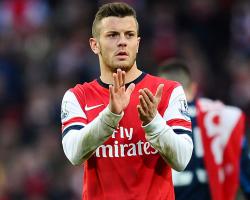 This has been another stop-start season for the 22-year-old, with injuries restricting the midfielder to just 19 starts in the Barclays Premier League.

Wilshere made a further five appearances from the bench, including his second-half appearance in Sunday's season finale at Norwich - his first match since breaking his foot nine weeks earlier.

His return is a welcome boost for Arsenal ahead of their FA Cup final appearance against Hull this weekend, although Wenger was coy when asked whether he was fit to start.

However, the Gunners boss was more forthcoming when it came to Wilshere's World Cup chances after the midfielder was named in England's 23-man squad on Monday.

"How has he been this week? Good, he works hard," Wenger said.

"We have a hard session today again and he progresses

He played 30 minutes at Norwich, that was planned, he came out well.

"I think if you ask me about the World Cup, he should just have enough time to be fully fit."

The other Arsenal player called up by England this week was Alex Oxlade-Chamberlain.

The 20-year-old has not featured since Arsenal's 3-0 win at Hull on April 20 due to a groin problem.

"Everybody should be available who played in our last game at Norwich," Wenger said

"There's still some uncertainty about Oxlade-Chamberlain and Thomas Vermaelen, who was out for the last minute with five stitches in his knee.

"We'll know more about that tomorrow or Friday."