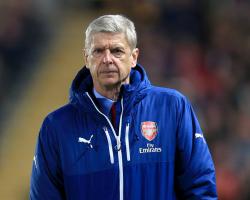 Wenger claimed Arsenal's 3-1 triumph over Hull was more evidence of their progress, but responded to questions about the Gunners challenging for title honours next season by saying: "Ask me in August."

The win at the KC Stadium means the Gunners have scored 100 goals in all competitions this season, are in the Champions League next season and are in pole position to finish second in the Premier League behind champions Chelsea.

It extended Arsenal's unbeaten run to 10 games - of which nine have been wins - and came via two Alexis Sanchez goals, his 23rd and 24th of the season, either side of Aaron Ramsey's deflected finish.

It could have been embarrassing for the Tigers but they responded in the second half and had a Stephen Quinn header in reply.

Wenger said: "We set ourselves the target to continue our run and make progress as a team and I think tonight was a demonstration that we can keep the quality very high and play the kind of football we love to play for long periods in the game.

People look at ourselves in a different way to September - I think we are consistent and that's the first sign of quality."

Asked if he believed Arsenal would be ready to challenge for the title next season, Wenger added: "Ask me in August - give me a little breather.

"I'm not a prophet

Football is unpredictable, no one know how strong teams will be at the start of the season

What is important is to start strong.

"What is at stake now is to finish second

If we maintain our run we will, and then the FA Cup final.

"We gave everything to come back into the title

Another was Chelsea at QPR when they didn't drop points

They were very consistent

They lost only two games.

"For me, finishing second makes a difference

We want to finish as high as we can

Let's see if we can maintain the run."

Wenger also praised Jack Wilshere after he came off the bench for his first appearance since ankle surgery in November, saying the England midfielder had re-discovered his "burst and acceleration".

He also confirmed Danny Welbeck has an inflamed knee that kept him out of the game but that it would only be "a question of days" before he returned.

"Of course we want to win the title next year, but second place this season is for now the most important thing," Cazorla said on Sky Sports 1

"We want to finish in the Champions League places and win the FA Cup final."

Cazorla had another outstanding personal evening, driving Arsenal forward and setting up Ramsey for the second goal of the night.

"I enjoy it a lot when we play here, but the most important thing is the victory," he said

"The team is in a good moment and we want to keep this level up until the end of the season."

Hull boss Steve Bruce admitted it became a case of damage limitation in the second half but rued his team's mistakes - and luck.

"One thing we wanted to do in the second half is make sure it's not one of those ridiculously horrible evenings," he said

"When they have their tails up and are playing well Arsenal are as good as any team in Europe.

"We stuck at it in difficult circumstances

They are hard enough to play against when they get proper goals so to have two deflections was cruel.

"But you can't give the ball away, and that's so unlike us, especially in the middle of the pitch - we needed the luck and the roof has caved in."

Hull face fellow strugglers Burnley on Saturday in a potentially decisive game at the bottom.

"It's not going to keep us up or send us down," Bruce added

"But we've still got it all to do.

"It's a big game and this has been a difficult evening to we have to dust ourselves down and if we can get a result it will be a brighter picture."