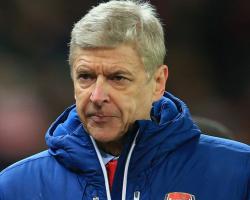 The French club, or Porto, would offer the Gunners the best option in the last 16 but they could also get Bayern Munich, one of last year's two finalists Real and Atletico Madrid, or Barcelona.

"We've never had an easy ride

I don't think many teams want Madrid," said the Frenchman.

Asked about the prospect of facing Monaco, the club he managed between 1987 and 1994, he added: "I'm not against it at all because it would be a visit to my first home there.

"Of course I would love to go there.

"I've got great memories of Monaco because they gave me a chance when I was a very young manager.

"We had many Champions League games there as well

When I arrived there, they had never passed the first round in the European Cup so we have good memories."

Midfielder Mathieu Flamini is less concerned about who Monday's draw in Nyon will throw up and more bothered about getting the squad up to full fitness to be able to compete at home and in Europe when the Champions League resumes in February.

"Hopefully we'll get all our injured players back by then and be able to focus on the Champions League, but we've got lots of big games before then," he said.

"We have so many games and it's important to recover now.

We always try to avoid big teams and always seem to get them, so at this stage of the competition we'll take anyone."

Monaco and Porto are not only Arsenal's ideal draw but also Manchester City's.

As runners-up in their groups neither of the English clubs is seeded and they both have to face a group winner in the last 16.

Manuel Pellegrini's team, having scraped through to the knockout stage, will not face Bayern having finished second to them in their group.

Instead they could get Borussia Dortmund, poor domestically this season but much better in Europe, or one of Atletico, Real, Barcelona, Monaco or Porto.

Even though Premier League leaders Chelsea comfortably won their group with four wins and two draws they could end up with a tie against Serie A leaders Juventus or Paris St Germain, second in Ligue 1, whose only defeat in six group matches came against Barcelona at the Nou Camp.

Jose Mourinho's side could also get Ukrainians Shakhtar Donetsk or Germans Bayer Leverkusen, who are third in the Bundesliga.

The draw for the Europa League will also be made in Switzerland, with Liverpool dropping into the competition from the Champions League to join city rivals Everton, Tottenham and Celtic in the last 32.

Brendan Rodgers' side will be unseeded, like Tottenham but not Everton, although two English clubs cannot meet each other until the next round.

Among those in the seeded pot are Inter Milan, Borussia Monchengladbach, Napoli, Fiorentina, Sporting Lisbon and Athletic Bilbao.