Arsenal fell to a surprise defeat at the hands of West Ham on Saturday as Manuel Pellegrini's side produced a strong 1-0 win over Unai Emery's visitors.

Alexandre Lacazette went close to striking first for the visitors early in the first half, seeing his low strike saved by former Gunner Lukasz Fabianski, before Felipe Anderson nearly fired the home side ahead later on, only to see whilst low drive whistle wide of Bernd Leno's far post.

Declan Rice had the biggest chance of the first half as he climbed highest to head just wide from a corner on the stroke of half time as the first 45 minutes ended goalless.

The Hammers midfielder ensured that the scoreline would not remain unchanged for long, however, as ​Arsenal failed to deal with a cross and Rice curled a clinical strike high beyond Leno and into the roof of the Arsenal net just three minutes into the second half.

Big chances were few and far between following the goal, as the Gunners failed to impose any real initiative or telling attack moments on the match as ​West Ham beat Arsenal at home for the first time in almost 13 years.

With an attack-minded team selection from Manuel Pellegrini, West Ham were able to assume the advantage of being the home team as the Hammers looked to play more on the front foot.

With Felipe Anderson, Samir Nasri and Michail Antonio operating as an advanced midfield three in behind the front man, West Ham looked more comfortable in possession, forcing Arsenal back and enabling the Hammers to take the game to the opposition as the home side typically should.

Declan Rice has scored his first goal in senior football after 55 games across all club competitions.

With plenty of creativity and flair now residing in the more advanced positions, ​Marko Arnautovic no longer appeared as isolated in attack as has often been the case this season.

STAR MAN - Fresh from committing his long-term future to West Ham, there is a great deal of buzz surrounding Declan Rice at the club, and the midfielder's performance on Saturday proved why. Rice worked tirelessly in the middle of the park, tracking back into his own box at times to make crucial tackles, whilst also providing an unlikely attacking threat for his side. His fine strike to give the home side the lead was a just reward for a strong performance from the youngster.

WORST PLAYER - Widely spoken about as West Ham's biggest threat heading into Saturday's match, Marko Arnautovic struggled to produce a performance to match the headlines at the London Stadium.

The Austrian forward did not have a bad game, but was unable to have any real impact on proceedings. Arnautovic's reaction to being substituted with 20 minutes remaining told the story of an uneventful afternoon in front of goal for the Hammers forward - and hinted that he might be gone by the end of the month.

Unai Emery's work on the training ground this week showed signs of results in defensive terms at the London Stadium. Arsenal were generally more regimented and resolute in their defensive shape on Saturday, though the more reserved approach cost the visitors any real initiative. The 3-4-3 shape was ideally suited to such an away test for the Gunners in their bid to keep the home side at bay, though the defensive mindedness of the setup handed a significant degree of attacking initiative to West Ham in the match. A later switch to 4-3-3 proved more effective.

The Gunners' sitting off led to them conceding West Ham's opener in part, as Arsenal failed to stamp sufficient authority on the match with a lack of any real cutting edge going forward. 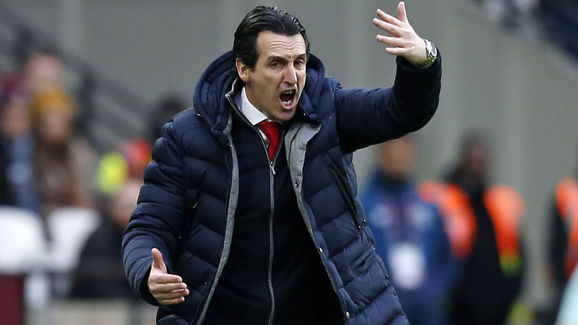 STAR MAN - Though Arsenal were unable to make the most of their attacking moves, Alex Iwobi proved to be a lively performer and the Gunners' most effective attacking outlet once more on Saturday. The Nigerian has shown vast improvements this season and was full of energy and purpose going forward again for the visitors at the London Stadium. Iwobi was Arsenal's attacking spark, albeit with a lack of final touch.

Granit Xhaka has now made more errors leading to goals in the Premier League (5) than any other outfield player since the start of last season.

WORST PLAYER - Granit Xhaka has been an improved performer under Unai Emery this term, but the Swiss midfielder looked overrun in midfield as the likes of Felipe Anderson drifted through the lines to cause problems for the Gunners in central areas. Xhaka was at fault with a poor attempt at a clearing header which lead to Declan Rice's opener for West Ham, before being replaced early in the second half.

West Ham travel to face ​Bournemouth in another tough Premier League clash at the Vitality Stadium next Saturday before facing AFC Wimbledon in the fourth round of the FA Cup a week later.

Arsenal's next outing at the Premier League sees Emery's side host ​Chelsea at the Emirates in a huge clash in the race for the top four next Saturday before facing ​Manchester United at home in the pick of the FA Cup fourth round ties the following week.