What is Arsene Wengers record like in north London derbies 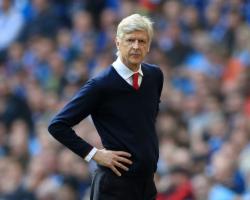 The Frenchman's future at the Emirates Stadium is unclear beyond the end of the season, and here we look at his record in the fixture in all competitions since he took over as manager in October 1996.

Wenger has an impressive record against Spurs

He has also never finished below Tottenham in the league, although that looks poised to change this term with the Gunners currently 14 points behind Mauricio Pochettino's men.

His career in the fixture got off to the perfect start as late goals from Tony Adams and Dennis Bergkamp steered them to a 3-1 win on November 24, 1996.

Wenger was unbeaten in his first six derbies before the record finally ended on November 7, 1999

Patrick Vieira pulled one back for Arsenal but they finished the match with nine men after Freddie Ljungberg and Martin Keown were sent off in the second half.

He celebrated his 10th derby with a 2-0 triumph secured by goals from Robert Pires and Thierry Henry inside the last 20 minutes.

Arsenal met Spurs in an FA Cup semi-final at Old Trafford on April 8, 2001

Spurs took the lead through Gary Doherty in the 14th minute but Arsenal recovered with goals from Vieira and Pires to book a place in the final, where they lost to Liverpool in Cardiff.

It ended in dramatic fashion as Spurs won a League Cup second-leg encounter 5-1 at White Hart Lane on January 22, en route to winning the competition in that season

He is currently unbeaten in his last four matches against Tottenham, with the most recent loss coming on February 7, 2015

The first meeting after that 5-1 hammering was his 30th in charge, and it was a cracker as two goals in the final two minutes earned Tottenham a 4-4 draw at the Emirates Stadium on October 29, 2008.

Wenger's teams have beaten Spurs by a three-goal margin on six occasions - with three 3-0 wins, two 5-2 wins back to back in February and November 2012, and a 4-1 League Cup victory in September 2010.

Two goals in two minutes just before half-time from Gareth Bale and Aaron Lennon put Tottenham on the way to a 2-1 win on March 3, 2013.

Wenger's best winning run in the fixture is three matches