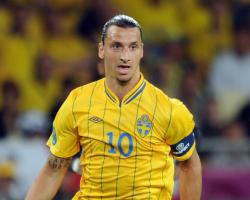 The Sweden international has never hidden his admiration for his former boss, right down to his delight about receiving a text about his performance ahead of Mourinho's arrival in Milan

United need more goals and he could provide them

However, Champions League football, and its possible absence from Old Trafford next season, could be a consideration

The 34-year-old was close to joining the Gunners early in his career and held talks with Arsene Wenger, admitting he felt like a little boy when he was in the Frenchman's office

The Gunners definitely need a striker but his age would count against him with Arsenal cautious of signing over 30s, and with the forward only likely to be available for 12 months the cost may outweigh the pay-off for Wenger.

Ibrahimovic won the Serie A title at AC Milan with current Juventus boss Massimiliano Allegri, who has been linked with the Chelsea hot-seat

With Diego Costa having had peaks and troughs this season, and Falcao flopping, there could be room at the Bridge for a big character like Ibrahimovic

However, Ibrahimovic would almost certainly have to forego European football

It would be a surprise to see Ibrahimovic move to Spurs, going against their policy of signing young players, and whether the numbers would add up for them remains to be seen

However, if they were interested they could be legitimate contenders should Mauricio Pochettino's side win their first league title since 1961.

Even though City would be one of the few to afford his wages it is unlikely the pair will resolve their differences to work together again when Guardiola moves to the Etihad in the summer.