Moise Kean reportedly rejected a late approach from Arsenal in favour of completing a deal to sign for Premier League rivals Everton.

The Juventus youngster looks set to join Marco Silva's side this week in an exciting and eagerly anticipated £35m deal for the club and its fans.

Despite his undoubted talent and impressive cameos in Serie A, regular first-team football at Juventus is not a guarantee for the 19-year-old, who has chosen to leave Turin for game time in 2019/20. 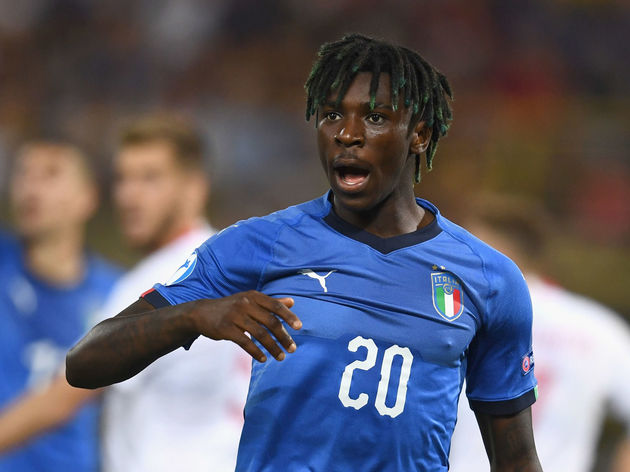 The three-cap Italy star is now on the verge of joining the Toffees, despite Arsenal's best attempts to hijack the deal, which should be completed this week, according to ​Sportsmail.

Their report claims the Gunners approached Kean's representative Mino Raiola to find out more about a possible late deal.

In Turin, Kean has found himself pushed some way down the pecking order, with the likes of Cristiano Ronaldo, Gonzalo Higuain and potentially Romelu Lukaku - whom Juve are keen on recruiting from Manchester United - favoured ahead of him in attack. The Mail's report claims Kean rejected the idea of a move to London over fears that it would have been a similar story there.

Alexandre Lacazette and joint top-goalscorer ​Pierre-Emerick Aubameyang are the established themselves strikers at the Emirates Stadium, while Nicolas Pepe looks set to join that attack imminently for around £72m.

Meanwhile, Everton have been in pretty dire need of a prolific striker for some time now and the promise of consistent first-team action under Silva is a great lure for the young forward. The former Torino academy prospect is someone with unrestricted potential and whilst a buy-back clause wasn't formally agreed, the Mail states that ​Juventus do have first refusal option if they want to re-sign him in the future.

But for now, ​Everton fans will be optimistic that Kean can replicate the progression of their former striker ​Lukaku, who joined ​Chelsea from Anderlecht before moving to Goodison Park to focus on gaining more match time.