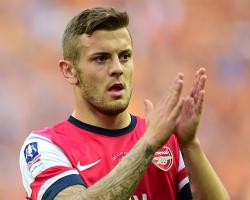 Wilshere was criticised last year when a photo of him smoking a cigarette outside a nightclub emerged and he pledged it would never happen again.

However, the most recent image shows him once more smoking alongside friends in a swimming pool, and Wilshere admits he regrets his latest indiscretion.

"The smoking? Of course I regret it," he was quoted as saying by several national newspapers.

"I've been seen before doing it

"I'm young and I'll learn from it

It's unacceptable and I will accept the consequences and I will move on."

Wilshere, speaking shortly before Arsenal's 1-0 friendly defeat to the New York Red Bulls, revealed he is driven to succeed by his critics.

The forthcoming season may be a defining one for Wilshere, who has had his fair share of injuries in the last three campaigns, but the 22-year-old is keen to prove he is up to the challenge.

He added: "It does motivate me to try harder in training and not just in training; it motivates me to improve because a lot of people have started to talk (about me) - people who don't know me but want to have an opinion

Now it is down to me.

"This is a big season for me

I am fully committed to the club and to my job and I want to show everyone that.

"Over the past few seasons I've had a few injuries

This season I'm looking to have a really great pre-season and get a really good base of fitness and take that into the season."