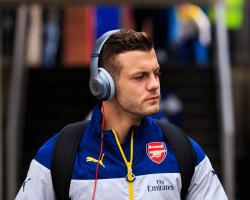 The England international made another outing for the Under-21s earlier this week, co-incidentally in a game with the Royals, as he stepped up his recovery from minor corrective ankle surgery.

Wilshere has not featured since the end of November following ankle ligament damage suffered against Manchester United, but was an unused substitute for the Barclays Premier League game at Crystal Palace on February 21 before it was decided to remove some studs on the pins inserted from a previous procedure which were causing discomfort.

During Wilshere's absence, the Gunners have surged back up to second place in the Premier League table following eight successive victories.

Competition in the Arsenal starting XI is now fierce, with the likes of Theo Walcott, whose contract talks remain on the agenda, and Danny Welbeck often having to watch on from the bench.

Gunners boss Arsene Wenger, though, is expected to rotate his side at Wembley, with captain Mikel Arteta, midfielder Abou Diaby and full-back Mathieu Debuchy all hoping to be involved again.

Wilshere feels the competition for places can only have a positive impact on the squad.

"Training here with the quality and intensity, that is what I need coming back from injury," Wilshere said on Arsenal Player.

"You can play as much as you want in the under-21s, but you cannot get that intensity of the Premier League.

"In training here, the little eight aside and keep balls is top level, and that is what I need.

"Everyone looks forward to the training sessions, it is short and sharp, everyone is fighting for a position (in the team) and you can really tell that."

Wilshere continued: "We have added real quality, world-class players to the squad and the main thing here is the team ethic.

"You can see that we have a great atmosphere around, everyone wants to work for one another and we go into every game knowing we can create chances if we stay strong defensively and win the ball higher up."

Walcott's last appearance was coming off the bench in the 2-0 Champions League win in Monaco on March 17, which saw the Gunners bow out on away goals.

The 26-year-old is out of contract at the end of the 2015-16 season, and speculation has already begun over his future

Last month, Walcott - who in January 2013 signed a three-and-a-half-year deal, just six months prior to the end of his existing agreement - took to Twitter to insist there was no bust-up and he was focusing on "doing my best for Arsenal."

Wenger has admitted progress has been slower than he would have liked, but the club remain optimistic a positive outcome with the England forward will be reached.

Wojciech Szczesny is, meanwhile, again expected to be in back in goal for the FA Cup tie, after losing his Premier League place to David Ospina.

Just like 12 months ago, defender Per Mertesacker insists Arsenal cannot be complacent against the Sky Bet Championship side, despite an impressive run of 16 wins from the past 18 matches

"We felt [pressure] last season a lot, because no one expected us to lose, for Wigan to go through and that will be the case again," the German said on the club's official website.

"We are more prepared, but you are never perfectly prepared.

"But with our level of confidence and with the team in good shape at the moment, I am very confident.

"The energy is really great in the team, we have a fantastic squad and the most important thing is that feeling."

German Serge Gnabry is another player on the comeback trail from injury, playing in the Under-21s 1-0 defeat to Reading on Monday.

However, it remains to be seen when midfielder Alex Oxlade-Chamberlain will be available after battling first a hamstring problem and now an inflamed groin.