Wilshere fired up for more success 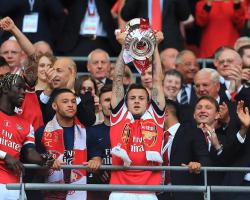 A graduate of the north Londoners' academy, the 22-year-old was particularly proud to this weekend help the Gunners secure a first trophy in nine years.

Wilshere came on in the second half of extra time with the score level and his late introduction alongside Tomas Rosicky gave Arsenal fresh impetus.

Aaron Ramsey soon struck to make it 3-2 and complete a remarkable turnaround against Hull - who went two up inside eight minutes - at a packed Wembley.

"The way we did it makes it that bit sweeter," Wilshere said

"It was horrible the first 10 minutes, I felt sick

It was horrible watching the boys lose.

"I knew if we got that goal in the first half we could go on and win the game.

We just needed to keep it tight at the back and be patient.

"It was quite lucky that we got that goal [from Laurent Koscielny] but when me and Tomas came on with 15 minutes to go, we were fresh and in the end you could see we were going to win the game."

The relief at ending Arsenal's nine-year wait for trophy was clear by the celebrations at the final whistle and the scenes that greeted the players as they paraded the trophy through north London on Sunday.

Wilshere got a bit carried away by goading rivals Tottenham by reciting a popular expletive-ridden chant, but will have only harnessed his reputation with the fans he loves.

"We had to get that trophy," he said

"There was no point not showing our character.

"We got the trophy - that's the main thing

We worked hard for nine years

Most of all it's for the fans

We paid them back today with the trophy."

There will be little time for Wilshere to rest on his laurels as this week he jets off to Portugal, where England are hosting a warm-weather training camp.

The midfielder only recently returned from breaking a bone in his foot and has not started a match since England's 1-0 friendly win against Denmark on March 5, yet he believes he will be fully fit for the World Cup.

"I have been training now for three weeks," Wilshere said

"I haven't been in the squad because we agreed with the manager that it was right that I got a good base for fitness.

"So I have been in the last two squads and played about 45 minutes I suppose altogether, but I feel fresh and a good week in Portugal will do me good.

"I am feeling [sharp]

I am going to enjoy the celebrations and then my head goes onto England.

"That is my first feeling of winning something and there's no better feeling, so hopefully we can do something with England."

Wilshere is joined in the 23-man squad by Arsenal team-mate Alex Oxlade-Chamberlain, although he was unable to shift a niggling groin injury to feature in the FA Cup final.

That has heightened concerns over his fitness for this summer's tournament, but Wilshere was quick to dispel them.

"Chambo? Yeah, he is all right," he said

"I think he was a bit upset not to be involved but he has only been training for two days.

"But, again, I think a week of training in Portugal will do him well

He'll be out there."