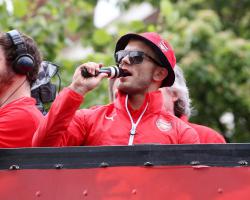 The 23-year-old, who came through the Gunners' youth ranks, took to the microphone to mock the club's fierce rivals as the players celebrated on a stage outside the Emirates Stadium

In similar scenes to 12 months ago, Wilshere then proceeded to lead the massed ranks of Arsenal supporters in a chant which included expletives against Spurs, who again finished below their north London neighbours in the Barclays Premier League table

On Monday, Wilshere apologised if his actions had caused any offence and was spoken to by Arsenal staff on the issues

However, the FA has now launched formal disciplinary proceedings

A statement read: "Jack Wilshere has been charged with misconduct in relation to Arsenal's FA Cup celebrations on Sunday 31 May 2015

"It is alleged his conduct in making and/or inciting certain comments during the club's open bus trophy tour was improper and/or brought the game into disrepute.

Wilshere had been warned by the FA following similar comments during the 2014 celebrations, and it is understood the latest outburst prompted the formal disciplinary action and may well result in a fine

While falling short of saying sorry for making the remarks, Wilshere used a Twitter post to apologise to anyone who had been upset by them

Apologies if I upset or offended any of u with my celebrations,'' he wrote