Wilshere must ignore the critics 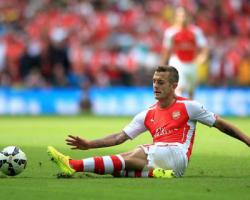 The 22-year-old has overcome several injury setbacks to become an integral part of both the Gunners' squad and the national team set-up.

However, Wilshere continues to find his every move questioned both on and off the pitch, after pictures emerged of him smoking again while on holiday after the World Cup, where Roy Hodgson's side failed to make it out of the group stages.

Wenger feels Wilshere, who battled back from a hairline fracture in his foot to help Arsenal win the FA Cup last season, just needs to concern himself with his own development and on staying injury free rather than worrying about what the pundits have to say.

"Before he was in (Calum) Chambers' position, then suddenly when you get to 22, the expectation level comes on you," said the Arsenal boss.

"(Manchester United striker Wayne) Rooney has gone through that, now it goes through Wilshere.

"I believe at the moment he should not respond to it, just focus on his game.

"If Wilshere can maintain to be fit physically, then he will make a huge career.

"At the moment, I believe he should just focus on that - being fit, present and to improve physically

The rest will come along.

"Yes (he needs to block everything else out), I told him the target is for him to have the whole season being available to play."

Wenger is in no doubt of Wilshere's character, having watched him come through a run of frustrating fitness problems - including an ankle injury which would see him ruled out of the 2011-12 season, missing both the European Championships and London Olympics.

"He is a guy who when he goes out there, he wants to play, he works hard, but he was out for one and a half years," Wenger added.

"I think he is on target of where he should be.