Wilshere ruled out for few weeks 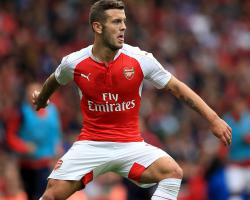 The 23-year-old England midfielder's career has been punctuated by injury and now he has suffered another - a hairline crack of his left fibula.

Wenger said on arsenal.com: "I had a bad surprise because it is a hairline crack in his fibula that makes him a few weeks out."

Reports had suggested Wilshere could be out for around two months, but Arsenal have not put an exact timescale on the injury yet

Wenger initially said it would be a "matter of days" before Wilshere returned, but it swiftly became apparent he would miss the Hammers clash - and now the prognosis is far worse.

It is the latest worrying blow for Wilshere, who returned in May following another lengthy spell out with an ankle problem and has had numerous injuries throughout his career.

Wenger added: "There is minimal damage apart from the bone damage - there is no damage at all apart from that.

"It was a collision in training and it was all completely accidental."

Wilshere will continue to be assessed and treated by FA Cup winners Arsenal and there was no mention of whether surgery would be required or not.