Wilshere taking nothing for granted 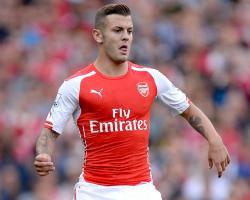 The Gunners battled to a goalless draw in the play-off first-leg at the cauldron of the Ataturk Olympic Stadium in Istanbul, where midfielder Aaron Ramsey was sent off late on for a second yellow card and so will miss the return match back in England next week.

Besiktas manager Slaven Bilic insists his well-organised side - who hit the crossbar right from kick-off through former Chelsea striker Demba Ba - are very much still in contention, although it remains to be seen if the former West Ham and Everton defender will be allowed in the dugout having been ordered to the stands late on by Serbian referee Milorad Mazic.

Wilshere knows Arsenal will have to be on their guard to qualify through to the group stages for what would be a 17th consecutive European campaign.

"It was a hostile atmosphere, but I think we battled well and showed a different side to our game, especially at the end when we went down to 10 men, it was tough, so we did well," Wilshere said.

"They worked just as hard as we did last year to get themselves into this position, so they are not going to just turn up (at the Emirates Stadium) and throw all of that hard work away

"It is not going to be an easy game and we can't take it for granted.

"They are going to come full of confidence from their performance in the first game and we are going to have to start how they did and take the game to them."

"We know how big a game it is, and we will treat it as a cup final."

Arsenal hit the woodwork themselves late on when substitute Alex Oxlade-Chamberlain's angled drive was turned against the far post by Besiktas goalkeeper Tolga Zengin.

Despite the loss of key man Ramsey - who netted a stoppage-time winner to beat Crystal Palace on the opening day of the new Barclays Premier League season - the Gunners will be boosted by the return of German World Cup winning trio Per Mertesacker, Lukas Podolski and Mesut Ozil, who could all feature for Saturday's trip to Everton.

England midfielder Wilshere said: "Having won the World Cup can have an impact, but the Germans have got a fantastic mentality anyway.

"Last year, you saw that - they are great characters to have in the dressing room.

"We are looking forward to getting them back and it is going to make our squad even stronger."

Oxlade-Chamberlain also feels there are plenty of reasons for Arsenal, who beat Manchester City to win the Community Shield at Wembley, to be positive.

"It is early in the season and you could argue not everyone is at their peak fitness yet, understandably, but that will come soon and we will get better from here," he said.

"The technical side of our game will improve

I am confident of that, but the togetherness and the will to win is definitely there.

"That is our basis to start from and then the technical side needs to come after, so we will push on from here.

"The important thing now is to switch our concentration to Everton away at the weekend, which will be a tough game and then we think about the Champions League again next week."

As well as deciding if Bilic - who apologised immediately after the game - must serve a suspension, UEFA will see if there is a case to answer against the Turkish club after Wenger reported an object being thrown at him as he walked off the pitch.

Arsenal will, meanwhile, assess the fitness of captain Mikel Arteta

The midfielder left the stadium in a protective boot around a twisted ankle and could miss the return to his old club at the weekend.