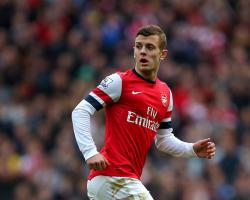 Ciro Immobile and Pierre-Emerick Aubameyang struck in a 2-0 victory for the Bundesliga club, but the winning margin should have been a landslide after the Gunners were overwhelmed at Signal Iduna Park.

It was clearly their toughest fixture in Group D but the dismal performance has raised concerns over their ability to make any meaningful impact in Europe this season.

Adding to the despondency is the ankle injury that forced Wilshere off in the closing stages.

Arsene Wenger played down the severity of the sprain, but a more informed assessment is expected ahead of Saturday's Barclays Premier League trip to Aston Villa.

Our next Champions League game (against Galatasaray on October 1) is at home and hopefully we'll get the three points," Wilshere told the London Evening Standard.

"It's never nice to lose a game - we wanted to come here and win - but that was our first Champions League group game.

"We have got five more so we have an opportunity to try and get 15 points and that is what we'll try to do.

"It hasn't quite clicked for us yet but we've got a lot of quality players and I'm sure it'll come right."

Arsenal's shortcomings have left Wenger open to criticism on multiple fronts and the Frenchman faces some tough decisions.

Once again Mesut Ozil drifted anonymously around the pitch, playing a couple of sublime passes but otherwise contributing little and his substitution on the hour mark was barely noticed.

Wenger will hope to have full-backs Nacho Monreal and Calum Chambers available for Villa after they missed out against Dortmund through injury and illness, but problems persist in defence.

Misfortune has robbed Arsenal of Mathieu Debuchy for two to three months - the Frenchman has ankle ligament damage - but Laurent Koscielny and Per Mertesacker were poor at Signal Iduna Park.

Wenger's refusal to add quality defensive cover other than Chambers and Debuchy over the summer has now returned to haunt him, placing his transfer policy under renewed scrutiny.

And the manager must hope striker Danny Welbeck begins hitting the target as soon as possible after his second outing for Arsenal was against notable for wasted opportunities.

"It was disappointing against Dortmund

They are a good team and we have got to be a bit smarter when we come to places like this," Wilshere said.

"With their gameplan, they wanted to press us high up the pitch and we let them do it in the first half.

"We started the second half quite brightly in the first couple of minutes and then unfortunately it was the same thing again on the counter attack and then the game is over.

"We knew what they were going to do

We should have played maybe a little bit longer in the first half than trying to play our football in our half of the pitch because once you lose it there, they are straight onto us.

"We had a few chances and even at 2-0, Danny had a chance and if he had scored that maybe the last 10 minutes would have been a different game."