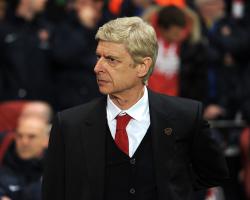 The Gunners are currently second in the Barclays Premier League, just a point off leaders Chelsea and through to the quarter-finals of the FA Cup - although their European hopes look over for another season following a 2-0 home defeat by Bayern Munich in the Champions League last week.

Wenger, 64, is understood to be close to agreeing a new deal to keep him at the Emirates Stadium.

Despite all of his success at the turn of the millennium, Arsenal have so far not been able to add to their 2005 FA Cup triumph.

The north London club have, of course, not stood still since then, reaching the 2006 Champions League final against Barcelona and twice beaten in the League Cup final, by Chelsea in 2007 and dramatically in the last minute against Birmingham three years ago.

Wenger was labelled a "specialist in failure" by Chelsea manager Jose Mourinho in response to comments from the Frenchman over this season's close title race.

Wilson - who was part of the successful 1971 Arsenal side and later worked as a goalkeeping coach under Wenger for the doubles of 1998 and 2002 - has labelled those mind games as "despicable", and feels the value of true success is not just all about silverware.

"I look not only at Arsene's great achievements when he first came," said Wilson, whose Willow Foundation charity will host a London Football Legends Awards on March 6, where England manager Roy Hodgson is set to be among those honoured

"It is about what has happened since then, with (Arsenal) building a new ground and all the debt that incurred, but still getting in the Champions League.

"Obviously you are going all that time without winning a trophy, which is now nearly nine years, but who has been winning things?

"Yes, Wigan won the FA Cup last year, but you need to play well and have the luck of the draw, but if you are talking about the major things, being champions of your country and Europe, then it all becomes secondary.

"Would you really rather say 'well, we won the League Cup', but then not be in the Champions League again next season? I personally wouldn't."

Wilson told Press Association Sport: "What Arsene has achieved with the (financial) constraints of the new stadium move, is truly amazing.

"We know Manchester City have a sheikh and Chelsea have an oligarch and have won things because of the money they have spent - Chelsea had not won the league championship for 50 years before Roman Abramovich arrived - but the Mesut Ozil signing shows the Arsenal board can now make a statement.

"We now have to go into this area of paying ?40million or ?50million if you are really going to seriously challenge under a company run in a proper way against the bottomless pits (of wealthy owners).

"So when you put everything into perspective in terms of the money and where the game is at, then to even be challenging this season, a point behind Chelsea with the way the club is managed, is a minor miracle and a great feather in the cap for this squad of players.

"If Arsenal could win the league this year, then in my opinion that would be an achievement to rank close to the 'invincibles' season."