​Juventus goalkeeper Wojciech Szczesny has opened up about a hilarious story involving former teammate Jack Wilshere at his wedding.

The pair spent eight successful seasons together at Arsenal between 2009-2017, winning two FA Cups and a Community Shield under the guidance of Arsene Wenger. Whilst their careers have now taken separate paths - with Szczesny starting between the sticks for European giants ​Juventus whilst ​Wilshere continues to fight his injury woes at ​West Ham - the two have remained firm friends, and the Polish international has plenty of hilarious stories involving his former teammate.

You usually see cases of midfielders 'falling asleep' in the middle of the park having lost the ball or just having a lapse in concentration but speaking in an interview featured on YouTube channel ​Foot Truck, Szczesny revealed a time he found Wilshere asleep not in the midfield for ​Arsenal - but quite literally in a bush during his wedding!

He said: "[Wilshere] My best friend, next to Krychowiak. At my wedding he got so drunk. We were looking for him everywhere for two hours and found him sleeping in bushes."

For the majority of the interview he reflects on fond memories shared with the likes of Thierry Henry, Aaron Ramsey and Tomas Rosicky during his time with the club, although that wasn't the case when asked about Robin van Persie. 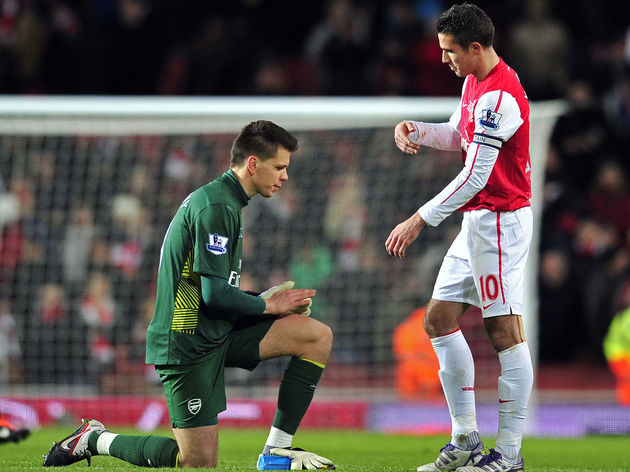 The Dutchman left Arsenal in 2012 to join fierce rivals Manchester United - where he won his first Premier League title in his first season with the club - and Szczesny went onto reveal he felt the striker was arrogant and could have won many more trophies if he'd have stayed at the Emirates Stadium.

He added: "You have to admit, he left for Manchester United and the next year he won the title, but the year after that he got benched, moved to Turkey and his big career ended. He could have made other decisions and achieved lots more at Arsenal. He's extremely arrogant - sometimes."

Szczesny himself will be hoping to add more trophies to his collection this season with Juventus currently 18 points clear at the top of Serie A, as well as progressing into the quarter finals of the Champions League after a remarkable comeback aggregate win over Atletico Madrid.