Would Vidal or Schneiderlin to Arsenal relegate Coquelin to the bench 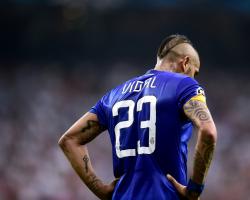 to lean down through its defences, and stroke its underbelly once, twice, three times before it finally realises it may be vulnerable after all and attempts to latch onto your wrist with all four paws and 20 claws, but by then you've withdrawn

This was Arsenal at the start of last season, before the emergence of Francis Coquelin

Get in, score, get out, while Arsenal were still busy looking pretty

The emergency recall of Coquelin from Charlton changed all that

An assuredness in midfield manifested and thus the confidence seeped back into the center backs, to the point that the opposition were even allowed more possession in some games, almost coaxing them to come forward so as to lure them in, and then strike

I can almost hear the Manchester City midfield as one do their Admiral Ackbar impression as another pass is intercepted : "It's a trap!" they collectively cried in their heads, but it was too late, the ball and subsequently the game had gone

And thus it came to be that Coquelin was in truth Arsenal's season saviour, but will that be enough for Arsene Wenger to keep faith with a player who has been on the books at the Emirates since 2008 but only made 43 appearances in that time

Wenger now has cash to splash, and a fan base who know it, are reminded of that fact each time they pay the highest entry prices, and are craving for a serious run at the Premier League and Champions League

Both Vidal and Schneiderlin have far more experience than Coquelin with the latter already having racked up 230 appearances for Southampton, and Arturo Vidal has notched up 117 games for Bayer Leverkusen and 124 for Juventus

Sentiment rarely wins games and if one or indeed both players find their way to the Emirates then Coquelin could find himself relegated to the bench having ironically been one of the orchestrators for the team attaining the Champions League football which then drew his replacements to the club.