Some would say undeserved. 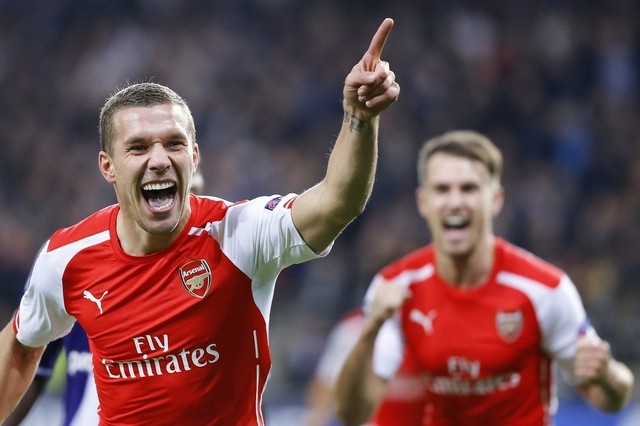 For almost all of this game we played second fiddle to an Anderlecht side who clearly wanted it more than we did. Their Champions League record isn't great but if last night's showing is anything to go by it can't be for lack of heart.

We on the other hand looked jaded and disinterested. The only player who came out of the game with any credit was Sanchez, who ran his socks off all night. The rest were forgettable, maybe with the exception of stand-in keeper Martinez who saved the day on a couple of occasions.

I'm sure we'll qualify from the group, but when we meet a quality side - as we of course will - i can't see us putting up much resistance. There's a clear lack of confidence in some of the players which much be addressed.

Substitute Lukas Podolski netted a dramatic late winner as Arsenal came from behind with two goals in the final two minutes to beat Anderlecht 2-1 and hand manager Arsene Wenger a 65th birthday to remember at the Constant Vanden Stock Stadium.

It had looked like the Gunners were set for a second away defeat in Champions League Group D after the Belgians went ahead through Andy Najar on 71 minutes.

However, just as time was running out, full-back Kieran Gibbs cracked in a superb volleyed equaliser, before forward Podolski swept home a dramatic winner.

Anderlecht had a point to prove having been undone 3-0 at home by the Group D leaders Borussia Dortmund last time out and were dangerous going forwards, led by Cyriac, the former Charlton forward, and the industry of Dennis Praet, who once had a trail at Arsenal as a teenager.

The Gunners had plenty of possession in the Anderlecht half, but rarely looked like breaking down the home defence during a tepid first half.

Sanchez saw a close-range flick saved after a floated free-kick into the Anderlecht penalty area as Arsenal showed some signs of life, with Aaron Ramsey then shooting just wide.

Arsenal's clearest opening of the night came on 63 minutes when Cazorla was played clear down the left, but his angled drive was saved by Silvio Proto.

It proved a costly miss as Anderlecht took the lead on 71 minutes when a floated cross from Praet was headed in by Najar.

Former Portsmouth defender Anthony Vanden Borre had a miskicked effort loop onto the top of the crossbar.

Martinez saved from Steven Defour, but Arsenal rallied after Gibbs' smashed home a deep cross by right-back Calum Chambers before Podolski won it in the most dramatic of finishes.

Arsenal almost got off to a flying start when Sanchez turned Frank Acheampong inside out on the right touchline before cutting the ball back into the penalty area.

However, the on-rushing Cazorla could only crash it horribly wide off his shin after the ball kicked up from the bobbly surface.

Anderlecht, cheered on by their drum-beating fans, offered plenty of threat going forwards, with Praet at the head of a five-man midfield.

Arsenal defender Nacho Monreal, deployed again at centre-back with Calum Chambers on the right, collected an early yellow card for a bodycheck on Cyriac, the Ivory Coast forward who played at Charlton from 2007 until January 2009 when he signed for Standard Liege.

On 11 minutes, Ibrahima Conte tripped Danny Welbeck to concede a free-kick in a central position, some 25 yards out. However, Cazorla's effort was straight into the wall.

Arsenal had only managed one goal in their last four European away ties and lacked a decisive pass when in the final third.

Acheampong was a danger down the left, and sent a low cross through the Arsenal penalty area after getting clear of what was a high backline again on 31 minutes.

Half-time could not come soon enough, with the vocal home fans taking great delight in using some rather choice Queen's English to taunt the travelling Arsenal support.

Anderlecht were quickly on the offensive at the start of the second half, with Ibrahima Conte's 12 yard effort deflected behind.

A deep free-kick from the left was then drifted into the Belgian's penalty area by Cazorla, but Sanchez could not direct an effort past Silvio Proto.

Ramsey then fired wide after more good work from the busy Chilean, signed for £30million from Real Madrid in the summer.

Anderlecht, however, remained a threat on the counter, with Preat creating space on the edge of the Arsenal box only to curl the ball high into the stands.

Arsenal had a great chance to go ahead on 63 minutes when Gibbs played Cazorla into the left side of the penalty area, but his low, angled drive was too close to Proto, who made a smart save.

Anderlecht took the lead on 71 minutes.

A quick break saw the ball worked out to Praet on the right side of the Arsenal penalty area and his floated cross was headed into the bottom right corner by Najar, who got between Per Mertesacker and Chambers.

Wenger made a double change as Mathieu Flamini was replaced by Alex Oxlade-Chamberlain and Joel Campbell came on for Welbeck.

It almost got worse for Arsenal when, following another swift counter, Vanden Borre saw his miskicked shot loop up onto the top of the crossbar.

Arsenal looked set to be left with plenty of questions from another disappointing result, but there was to be high drama in the closing moments.

The ball was worked out to Chambers, who floated over a deep cross towards the far post, where Gibbs arrived at pace to crash the ball back into the opposite corner.

Arsenal were not about to settle for a point, however, and poured forwards.

With Anderlecht claiming a foul in the build-up, Oxlade-Chamberlain's cross was pulled back by Sanchez, and the rebound off a defender fell right at Podolski's feet as the German gleefully crashed it home from two yards.