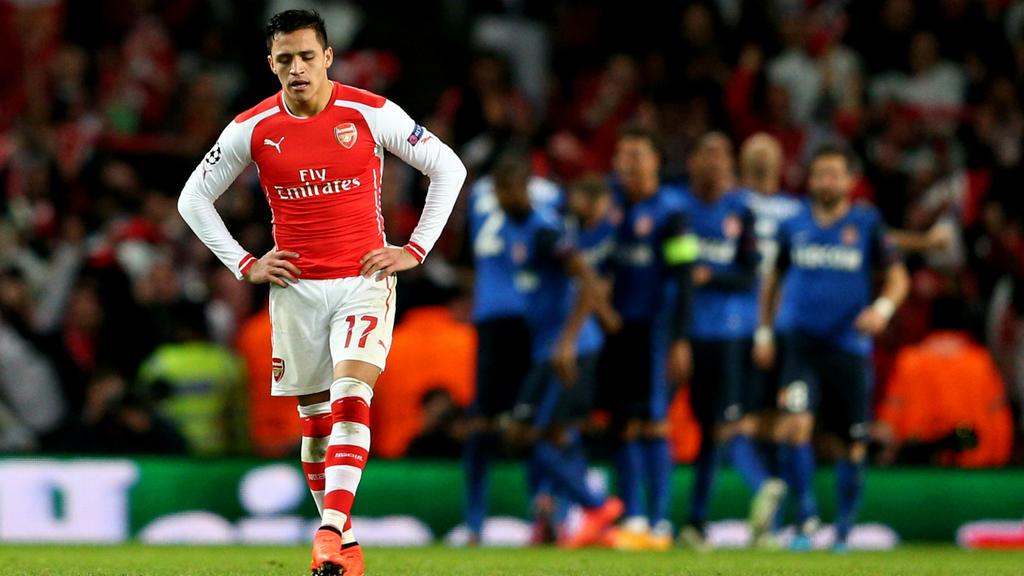 For the first five minutes we looked as though we meant business, then it all went downhill. Not one member of the team had a good game - we were disjointed, lacking in ideas, and worst of all disinterested.

Had we taken the game for granted? - it certainly looked like it.

Problem is, Monaco weren't dancing to our tune. Despite being short of forst choice players they looked eager, pacey, and composed.

Too good for us on the night.

The Ox's late goal might have given us a chance over two legs, but his subsequent error that led to their third means that we face an almost impossible job in the return leg, against one of the meanest sides in the competition in terms of conceding goals.

I wish Kondogbia was on our side.

Former Tottenham striker Dimitar Berbatov returned to haunt Arsenal as Monaco secured a 3-1 win in the first leg of their last 16 Champions League tie at the Emirates Stadium.

The French side, whom Gunners boss Arsene Wenger guided to the Ligue 1 title in 1988, had been viewed as one of the weaker seeds for the knockout stages, but proved anything but as Arsenal failed to get out of first gear and were punished as Olivier Giroud had a night to forget, missing several good chances.

A 25-yard deflected effort from Geoffrey Kondogbia put Monaco ahead on 38 minutes, and after Giroud had spurned another two great chances to get his side level, Berbatov crashed in a second on the break.

Substitute Alex Oxlade-Chamberlain, returning from a groin injury, grabbed Arsenal a lifeline in stoppage-time only for Yannick Carrasco to slot home a third away goal on the break which leaves Arsenal facing exit from Europe before the quarter-finals once again.

It had earlier been a positive start, as Danny Welbeck, preferred again to England team-mate Theo Walcott, got ahead of Elderson and into the Monaco penalty area, but curled an angled shot just over.

Mesut Ozil was appealing for handball as Brazilian defender Wallace came across to shepherd a long pass up field out for a corner - with replays showing the German may well have had a case despite it being missed by both the referee and his assistant behind the goal.

Monaco - who had conceded only twice in the last 17 matches - looked to hit Arsenal on the break with the 34-year-old forward Berbatov, who left Fulham to join Monaco in Janaury 2014, the main outlet. He was roundly jeered by the home fans but would have the last laugh.

When the Gunners did manage a to briefly rally, Alexis Sanchez had to dig the ball out from behind him 18 yards out, and floated it just over the crossbar.

Joao Moutinho's volley flew high off target after a break down the left, before Monaco took an unexpected lead on 38 minutes.

The ball was moved inside to Kondogbia some 25 yards out, and his shot took a big deflection off Per Mertesacker and flew past David Ospina.

The Gunners, who had been in good domestic form to climb into the top three of the Premier League and FA Cup quarter-finals, needed to inject some life into their game for the second half.

Sanchez burst clear down the right and crossed to the near post, but Giroud missed his kick and stabbed the ball wide.

The French forward, who netted his 50th Arsenal goal in Saturday's 2-1 win at Crystal Palace, was beating the turf in frustration again a few minutes later when he headed over after a curling free-kick into the Monaco box.

It proved a crucial miss, as Monaco broke to double their lead on 53 minutes with a clinical counter attack.

After Mertesacker over-committed upfield, Anthony Martial carried the ball down the left and pushed it square to Berbatov, who showed good strength to hold off the retreating Arsenal defence and slam the ball past Ospina.

The Emirates Stadium faithful now vented their frustrations on the team as Arsenal could not get any sort of rhythm.

Heads were in hands again when Sanchez's snapshot was parried out by goalkeeper Danijel Subasic and fell to Giroud, who could only blast the ball over from six yards.

It proved the last act for the France forward as he was replaced on the hour by Theo Walcott.

Monaco almost went further ahead when Moutinho picked out Martial on the overlap, and his angled drive was beaten away by Ospina.

Walcott nipped ahead of the defence onto a through-ball, and saw his shot saved, with the rebound falling to Welbeck, but somehow the goal-bound follow-up hit his team-mate's leg and spun over the crossbar.

Arsenal made another change as Oxlade-Chamberlain, out since mid-January, replaced Francis Coquelin.

The England midfielder produced a fine curling finish from the edge of the penalty area in stoppage time.

But as they pressed for an equaliser, Arsenal were then hit with another hammer blow on the break as Carrasco slotted the ball into the far corner to leave Wenger's side with it all to do when they head to the Principality next month.