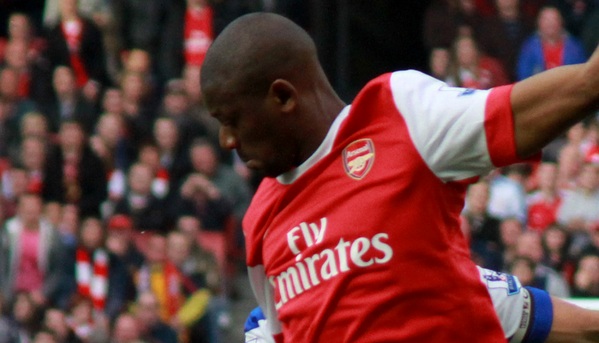 Of course we do, but in the grand scheme of things it's not important.

This game will be remembered by some passable performances from youngsters, and some poor work by our more experienced players which is a shame.

Sanchez was a class above the rest - He scored a belter of a goal and worked his socks off all night.

New signing Diaby was back in the fray, and looked useful. Let's hope that he stays fit this time - if he does I can see him getting more games.

Now we look forward to this weekend's game - an altogether more important fixture, and hopefully an altogether better performance!

An exquisite Nathaniel Clyne strike saw Arsenal's Capital One Cup campaign end at the third-round juncture for the first time in 12 years as Southampton secured a maiden win at the Emirates Stadium.

Many, including Arsene Wenger, had expected Saints to implode after a summer in which they lost manager Mauricio Pochettino and a host of key players.

However, Ronald Koeman's side continue to confound the doubters and won a fifth successive match in all competitions at a sold-out Emirates, where 5,000 visiting fans roared Southampton on to a 2-1 win against the much-changed Gunners.

Wenger called Saints "miracle workers" in the build-up to the third-round tie, which looked likely to be beyond them when Alexis Sanchez fired home a wonderful 25-yard free-kick with just 14 minutes on the clock.

The visitors did not wilt, though, and Sadio Mane, belatedly making his debut after work permit problems, quickly earned a penalty off Tomas Rosicky, which fellow summer signing Dusan Tadic coolly slotted home.

Graziano Pelle clipped the woodwork as Southampton continued to boss Arsenal's inexperienced defence, which could only watch on helplessly as Clyne thundered home a wonderful goal from 30 yards.

Debutant David Ospina could not get a hand to the fierce drive, although did well to keep his side in the game with a fine save to thwart Steven Davis and then Tadic.

Saints - second in the Premier League - had to defend resolutely as the match came to a close but held out for a first win against Arsenal since 2002, continuing Wenger's wait to get his hands on the one domestic trophy to have eluded him.

The Frenchman made 10 changes for this match, including giving injury-plagued Abou Diaby his first start in 18 months.

The only survivor from the league win at Aston Villa was Calum Chambers, facing the club he left in the summer as part of a back four with just 54 Arsenal appearances between them - the majority by Francis Coquelin, playing out-of-position at left-back.

That inexperience showed after nine minutes, when debutant Ospina was forced to smother a Davis attempt after he was all too easily put through by Tadic's ball over the top.

Arsenal's first noteworthy attack soon followed but Rosicky directed a tame header at Fraser Forster, who was not so lucky the next time the hosts had an attempt.

Showing just why the Gunners forked out so much for him, marquee summer addition Sanchez dusted himself off after a foul to strike an exquisite 25-yard free-kick into the top-left hand corner - a strike so good Forster barely moved in the Saints goal.

It was a wondrous effort but one that only had the Gunners ahead for six minutes. Mane's quick feet drew a penalty from Rosicky, with Tadic keeping his cool amidst jeers from the home fans to roll the spot-kick straight down the middle.

Saints soon returned to the attack with Mane hitting wide under pressure and Pelle clipping the woodwork with a first-time strike from a Tadic pass.

Arsenal were struggling to create clear-cut chances and Saints turned the match on its head with a fantastic long-distance effort of their own.

Tadic's corner from the left was only cleared as far as Clyne, who took a touch before hitting fizzing 30-yard effort that Ospina could not cope with.

It was a wonderful goal that sent the visiting supporters into raptures and put Saints ahead at the break, which ended with Forster having to deny a close-range Lukas Podolski effort.

Saints returned strongly after half-time as Ospina was forced into a superb save low to his right to stop Davis ending a wonderful team move, involving teenager Matt Targett, Mane and Tadic.

Florin Gardos, making his full debut, headed over as Saints looked to put the match out of reach, which they would have done had Ospina not denied a low, powerful Tadic free-kick.

Arsenal upped the ante as the match entered the final 20 minutes, with Joel Campbell having a soft penalty claim rightly rejected before Forster made a crucial stop to deny Sanchez.

The Chile international failed to beat the wall with a free-kick as the clock wound down, with Jose Fonte and Gardos doing brilliantly at the heart of defence to keep Arsenal at bay as Pelle and substitute Shane Long came close at the other end.