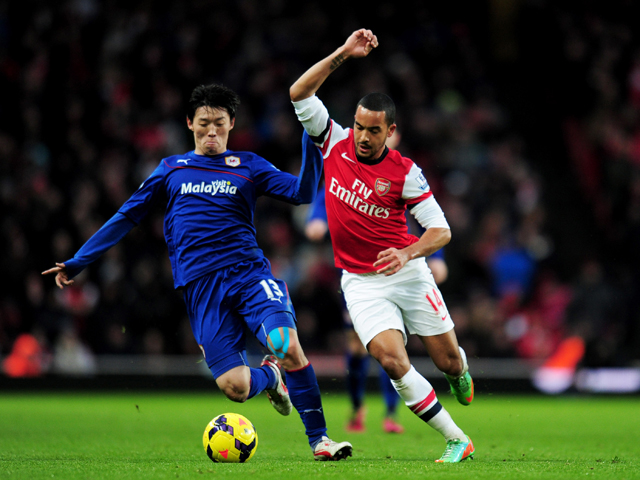 Many teams have come to The Emirates looking for a point, and many have succeeded.

For 88 minutes it looked as though Cardiff would soak up the pressure which during the last 15 minutes was relentless, but step up Niklas Bendtner - the unlikely hero who would ensure our place at the top of the table on New Year's Day.

Theo grabbed a second as Cardiff were still reeling at their defence being unpicked.

The lads march on.

Arsenal beat managerless Cardiff with two late goals to return to the top of the Barclays Premier League with a 2-0 win at the Emirates Stadium, where Ole Gunnar Solskjaer watched from the stands.

Former Manchester United forward Solskjaer travelled to London on New Year's Day as talks stepped up over him replacing the sacked Malky Mackay, and the appointment could be confirmed on Thursday if negotiations between the Molde boss and Cardiff owner Vincent Tan progress well.

Under what could well be the last match in charge for David Kerslake and first-team coach Joe McBride, the Bluebirds held out in the face of enormous pressure until Arsenal substitute Nicklas Bendtner crashed home with just two minutes left and Theo Walcott knocked in a second on the break in stoppage time.

Solskjaer, 40, will have his work cut out, though, to keep his new club clear of being dragged into a relegation battle following just one win in the last 10 Premier League games.

Arsenal, meanwhile, again answered their critics to dig deep and overcome their injury problems to leapfrog Manchester City back to the summit.

With Olivier Giroud missing because of an ankle problem, Lukas Podolski led the attack.

However, it was pacy forward Walcott who provided the main outlet as Arsenal aimed to play him away behind the Cardiff defence.

On 14 minutes, England midfielder Jack Wilshere, who turned 22 on Wednesday, whipped a low ball in from the left which Walcott was just unable to reach as he slid in at the far post and put his shot into the sidenetting.

Arsenal slowly started to dominate possession, with Santi Cazorla firing wide from 20 yards after another positive break down the right.

The home fans in the Clock End were screaming for a penalty on 25 minutes when Gary Medel looked to have tripped Wilshere as he darted into the left side of the Cardiff area, but referee Jon Moss was not interested.

In a rare Cardiff attack, Jordon Mutch got away down the left and drilled in a low shot which Wojciech Szczesny kicked clear.

Clever play by Cazorla in the left side of Cardiff box saw the Spaniard pick out a ball back to Walcott, but his snapshot flew wide.

Conditions did not really improve for the start of the second half, but Arsenal were soon back on the offensive as Bacary Sagna flashed an angled half-volley wide from 20 yards.

Cardiff felt they should have been given a penalty when a cross from Craig Noone came off Nacho Monreal's boot and up on to his arm, but the officials were having none of it.

Arsenal continued to press, but lacked a decisive pass in the final third.

Wilshere collected the ball on the left before cutting back into the Cardiff penalty area and his fierce angled drive cannoned back off the outside of the near post.

Per Mertesacker glanced a bullet header wide from Walcott's cross and the big German was again close when arriving at the far post from a corner as his downward header brushed the woodwork.

It remained one-way traffic heading into the final 15 minutes and Walcott looked to have been clipped by Ben Turner as he darted into the right side of the Cardiff penalty area.

Sagna's looping header was knocked off the line by Steven Caulker, but the visitors' resistance was finally broken on 88 minutes.

Monreal floated over a deep cross from the left, which Sagna headed goalwards and after David Marshall made a fine reaction block, Bendtner was alert to stab the loose ball home.

It came at a cost, however, as the Denmark forward picked up an injury in his collision with the Cardiff goalkeeper and had to be replaced by Thomas Vermaelen.

In stoppage time, Walcott was sent clear by Wilshere and clipped the ball over Marshall to seal another hard-earned victory.