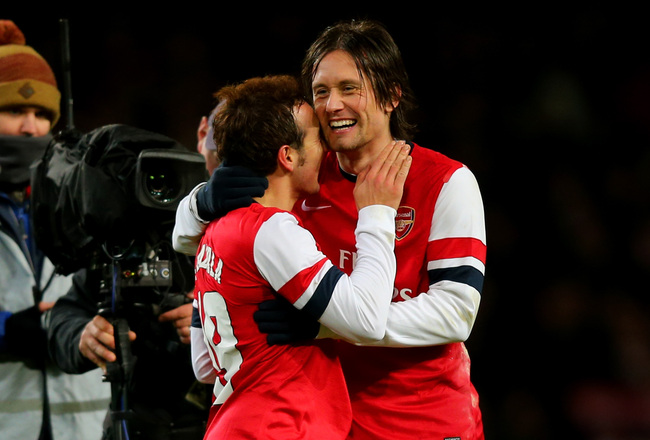 This should have been a competitive game between to reasonably well matched sides - it wasn't. Spurs never turned up, and in truth the scoreline flattered them.

As for our lads, they were superb. Ozil and Giroud were absent but it didn't seem to matter.

Goalscorers Cazorla and Rosicky ran the show, and Theo was lively up front. he was even livelier whilst being stretchered off in front of the Spurs fans and no doubt he'll be in trouble for his '2-0' gesture despite being pelted with coins at the time.

Ah well - we progress into the next round which is good.

Arsenal swept aside north London rivals Tottenham 2-0 at the Emirates Stadium to take their place in the fourth round of the FA Cup.

Santi Carzola drilled in a fine opening goal on 31 minutes, before Tomas Rosicky doubled the lead on the hour with a well-taken finish after robbing Danny Rose on the halfway line and sprinting clear.

Tottenham, who had shown signs of improvement under new boss Tim Sherwood, were overrun in midfield as their strike pair Emmanuel Adebayor and Roberto Soldado failed to cause many problems.

The victory came at a cost, however, with England forward Theo Walcott carried off on a stretcher in the closing stages after appearing to suffer a knee injury, which if proved serious could force manager Arsene Wenger into the transfer market to bolster the depleted attacking options of the Barclays Premier League leaders.

It was a bright start by both sides.

Spurs created the first opening on nine minutes as a deflected clearance sent Christian Eriksen in on goal.

However, Arsenal number two Lukasz Fabianski spread himself well at the near post and put the ball behind for a corner.

Arsenal then broke quickly as Serge Gnabry fed Walcott, and the England forward took his shot early from 20 yards, which was bouncing into the bottom left corner before Hugo Lloris touched it wide.

Walcott continued to stretch the Spurs defence, with a curling effort deflecting off Vlad Chiriches and just wide before, from the resulting corner, Gnarby fired a shot inches over.

On 18 minutes, Arsenal captain Thomas Vermaelen, recalled to the heart of the defence, upended Mousa Dembele on the edge of the penalty area. Referee Mark Clattenburg - who had been at the centre of a row with Southampton captain Adam Lallana earlier this week - reached straight for his yellow card.

The pace of the match showed no signs of relenting as Cazorla whipped a 20-yard effort only a foot off target before Walcott beat the offside trap, but his low shot was kicked away by LLoris.

Arsenal swept into the lead just after the half-hour

As Kyle Walker came across to cover Michael Dawson, the German stabbed the ball out to Carzola on the overlap down the left and the Spaniard unleased a fierce drive back into the bottom corner.

The visitors, though, could well have been down to 10 men when Dembele pushed the back of his head into Jack Wilshere's face as the pair tussled following a coming-together in the centre-circle.

However, despite appearing to be close to the incident, referee Clattenburg took no action.

After some positive Spurs possession at the start of the second half, Adebayor failed to connect properly with Lennon's cross through the Arsenal penalty area - much to the amusement of the home fans in the Clock End.

On the hour, Walcott cut into the right side of the Spurs box and rounded Lloris, but the angle was too tight and his cut-back hit the side-netting.

Rose dawdled on the halfway line, which allowed Rosicky to nip in and take the ball from the Spurs defender.

The Czech playmaker sprinted clear and on into the penalty area, where he held off Walker to dispatch a lovely chip over the keeper and send Arsenal into round four.

Fabianski held onto a low drive from Dembele, before Arsenal brought on Matheiu Flamini for Wilshere and then, to underline the new strength in depth introduced club-record signing Mesut Ozil for Mikel Arteta.

Spurs felt they should have been given a penalty when Walker flicked the ball up onto Cazorla's arm, but neither the referee or his near-side assistant Peter Kirkup were interested.

Arsenal had to play the closing stages with 10 men as Walcott was carried off on a stretcher after appearing to jar his knee.

The forward was taken around behind the Arsenal goal, in front of the Spurs fans - some of whom threw objects, which appeared to include coins and plastic bottles.

Walcott signalled a "2-0" gesture with his hands, before donning an Arsenal scarf as he was carried on around the stadium.