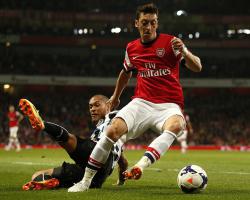 Arsenal came from 2-0 down to win a dramatic FA Cup final 3-2 with a goal from Aaron Ramsey in extra-time to end their nine-year wait for a trophy.Hull had ealier stunned the Gunners at a sun-baked Wembley as they went 2-0 up inside eight minutes through James Chester and captain Curtis Davies, who both capitalised on some poor defending from balls into the penalty area.

Arsenal, though, rallied and reduced the deficit through a superb 30-yard free-kick from Santi Cazorla.After several Arsenal penalty claims, notably a pull by Tom Huddlestone on Olivier Giroud, were turned down by referee Lee Probert, the equaliser evetually came on 71 minutes when Laurent Koscielny knocked the ball into the net from a corner before being clattered by Allan McGregor.The Hull goalkeeper saved well from Giroud as the match went into extra-time when the France forward Giroud crashed a header against the crossbar.

However, it was left to Ramsey - who left Wembley in tears as a schoolboy following defeat with Cardiff in the 2008 final against Portsmouth - to complete a remarkable turnaround when he crashed in a loose ball from the edge of the penalty box on 109 minutes which handed Arsene Wenger his first taste of success since 2005, and might just convince him to sign a new contract.

There was, though, almost more high drama as goalkeeper Lukasz Fabianski - in most likely his last appearance for Arsenal - came rushing out of his goal and was beaten to a loose ball down the left by Sone Aluko.The Hull forward looked to sweep the loose ball into an empty net, but agonisingly for the Tigers fans massed behind the goal, it rolled across the line and wide as Kieran Gibbs chased back.