Arsenal 4 Liverpool 1 - The lads march on 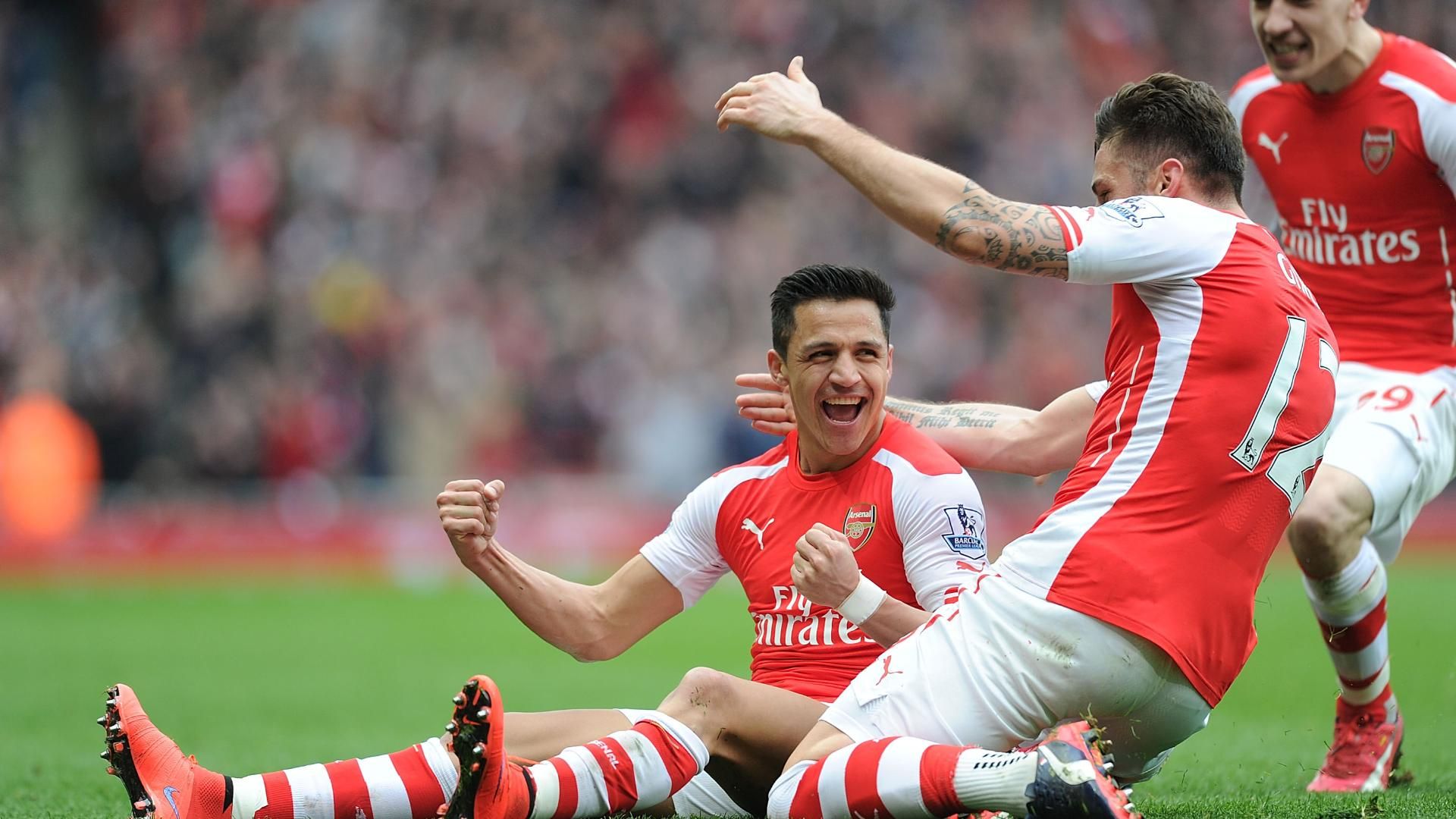 This was a fantastic display. Three goals in 8 minutes during the first half left the Scousers shellshocked and unable to respond.

Bellerin, Ozil and Sachez scored goals of such quality that it's hard to recall us scoring three better goals in a game since Dennis Bergkamp's night at Filbert Street all tose years ago.

So we march on - tenner on us for the title anyone?

Arsenal kept up the pressure at the top of the Barclays Premier League as Liverpool were blown away 4-1 at the Emirates Stadium, where Reds contract rebel Raheem Sterling failed to make an impact.

All the pre-match headlines had been over Sterling's declaration he was "not a money-grabbing 20-year-old" despite rejecting Liverpool's offer of a new deal, said to be worth some £100,000-a-week.However, the England forward blew his big chance to show why he is worth a pay rise, unable to convert a golden chance in the first half before Arsenal stuck three goals in the space of just eight minutes to settle matters.

Hector Bellerin rolled in a superb curling effort, with Mesut Ozil's free-kick and a blistering 20-yard strike from Alexis Sanchez effectively settling the contest before a fine late effort from Olivier Giroud sealed Arsenal's seventh straight league victory.Liverpool netted a consolation penalty through captain Jordan Henderson - awarded for a foul on Sterling - but then saw Emre Can sent off for two yellow cards as a second successive defeat dealt a potentially fatal blow to their hopes of a top-four finish.

Arsenal had made a blistering start.Liverpool goalkeeper Simon Mignolet saved from Santi Cazorla and then was alert to divert a low shot from Aaron Ramsey, with Mamadou Sakho stabbing clear as Cazorla looked set for a tap-in.

Protest groups from both sets of supporters had missed the opening 10 minutes, lobbying outside the ground at ticket prices in the wake of the new broadcast deal, while some of those inside also held banners against the rising cost of watching live Premier League football.

Liverpool, without suspended skipper Steven Gerrard and centre-half Martin Skrtel, had weathered the early storm and looked a threat on the counter.Sterling should have opened the scoring in the 21st minute

Lazar Markovic was played into the right side of the Arsenal penalty area by Phillippe Coutinho, and he elected to square for Sterling

However, the England forward had not anticipated the pass and could not apply the finishing touch as the ball ran away from him.

Sterling was soon back on his feet, flashing a low, angled drive just wide from 20 yards.However, Arsenal took the lead via the unlikely source of Bellerin, who curled home a superb effort on 37 minutes

Ozil fed Ramsey on the right, and the Welshman in turn laid the ball off to the full-back

Spaniard Bellerin, 20, waltzed around Alberto Moreno before despatching a sublime low shot into the bottom left corner.Before Liverpool could regroup, they were 2-0 down.Ozil was tripped by Sakho just outside the penalty arc

The German playmaker - who came in for criticism following his trip to a Berlin nightclub after missing Arsenal's win at Newcastle before the international break through illness - took the free-kick himself, curling the dead ball around the wall and past Mignolet.It got worse for the visitors just before the break when Sanchez rifled in a third.

Ramsey played the ball up into the path of Sanchez. The Chile forward - a target for Liverpool before his £32million summer move to Arsenal - stepped inside Toure before blasting the ball up over Mignolet into the roof of the net.

Liverpool made a change for the second half, with Daniel Sturridge replacing Markovic, the forward having pulled out of England duty during the international break through injury.Arsenal also soon were forced into a substitution as Laurent Koscielny hobbled off and Brazilian Gabriel Paulista came on.

In the 55th minutes, Giroud's bullet header was brilliantly tipped over by Mignolet, before Arsenal goalkeeper David Ospina had to be alert to deflect a snapshot from Can behind at the other end.

Ramsey appeared to have hurt his ankle, and was replaced by Mathieu Flamini on 62 minutes.With the hard work done, Arsenal took their foot off the gas, which saw Liverpool's pressure result in a penalty when Bellerin tripped Sterling on 76 minutes.

Henderson squeezed the spot-kick past Ospina into the bottom left corner, but momentum was lost when Can picked up his second yellow card with five minutes remaining following a foul on substitute Danny Welbeck.Cazorla's curling 18-yard effort shaved the outside of the post, before Giroud cut inside to blast home a left-foot shot into the top corner to continue his fine scoring form.