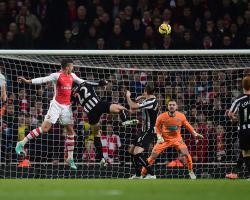 Arsenal 4-1 Newcastle: Match Report - view commentary, squad, and statistics of the game as it happened.Double double delight for GunnersOlivier Giroud and Santi Cazorla both scored twice as Arsenal closed back up on the Barclays Premier League's top four with a 4-1 win over Newcastle at the Emirates Stadium.The recent antagonism directed towards the club's manager also looked to have died a death as supporters chanted "There's only one Arsene Wenger" in support of the Frenchman.Arsenal maintained momentum from the midweek 4-1 Champions League win over Galatasaray in Istanbul to see off the challenge of Alan Pardew's men, who last weekend inflicted a first defeat of the season on leaders Chelsea.Giroud powered in a header on 15 minutes and, after Danny Welbeck had seen a goal perhaps harshly disallowed, birthday boy Cazorla made it 2-0 at the start of the second half with a neat chip.French striker Giroud then produced another fine left-footed finish at the near post, and after Ayoze Perez had reduced the deficit, Cazorla clipped home a late penalty as the feel-good factor returned for Wenger's side after the fall-out from their defeat at Stoke.The Gunners had been forced to start with a makeshift defence because of injury and suspension, so right-back Mathieu Debuchy was deployed at centre-half against his former club.Arsenal went close to opening the scoring on eight minutes as Per Mertesacker's flicked backwards header from a corner hit the underside of the crossbar and bounced away.It was 1-0 after 15 minutes when right-back Hector Bellerin won the ball in midfield, before it went out to Sanchez, one of several players rested in midweek.The Chile forward held up possession on the right before chipping the ball across the six-yard box, where Giroud powered a header into the top-right corner.Arsenal soon had the ball in the net again as Welbeck cut in from the left, brushing off Daryl Janmaat before dinking his shot over goalkeeper Jak Alnwick

However, referee Lee Mason had already blown for what he saw as a foul by Welbeck on the Newcastle defender.Welbeck fired an angled volley just wide after a clever chip from Sanchez into the right side of the Newcastle penalty area.Despite their dominance, Arsenal looked vulnerable to set-plays, and a superb double save from Wojciech Szczesny kept the scores level after 33 minutes.A free-kick was curled in from the right, which Yoan Gouffran glanced goalwards, but the Pole made a fine reaction save and was then in the right place to block the follow-up from Papiss Cisse at point-blank range.The hosts doubled their lead after 54 minutes with another goal of the highest order.Sanchez played a sliderule pass into the Newcastle penalty area, which Cazorla collected and skipped over Fabricio Coloccini's sliding challenge

The diminutive Spaniard stumbled, but stayed on his feet before clipping a sublime finish into the far corner to celebrate his 30th birthday in style.Before Newcastle could regroup, it was 3-0 after 58 minutes.Bellerin got to the right touchline before crossing for Giroud, who expertly guided the ball past Alnwick at the near post with the outside of his left boot.Newcastle reduced the arrears after 63 minutes when Perez headed in a free-kick from Jack Colback.Arsenal soon regained composure, with Kieran Gibbs firing wide after the ball bobbled around a crowded penalty area.After Arsenal appeared to have weathered the storm, chants in support of Wenger rang around the Emirates Stadium, with hope and belief again restored heading into the hectic Christmas schedule.Newcastle defender Paul Dummett tripped Welbeck in the right corner of the area after 88 minutes, and Cazorla stepped up to calmly slot home a 'Panenka' chipped penalty straight down the middle