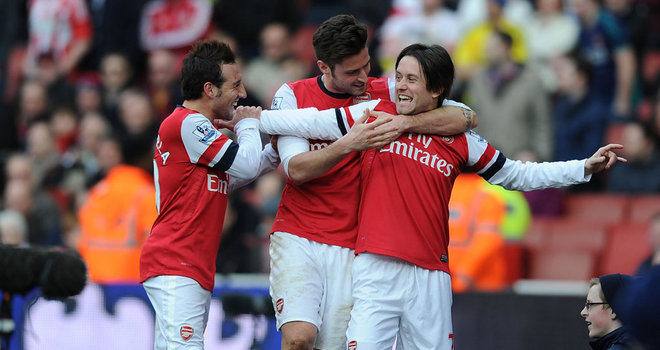 This victory was important - not just for the three points that keep us just behind Chelsea, but for the confidence of the players following the Bayern defeat.

Two goals for the returning Giroud were welcome, and Rosicky's strike was no less than he deserved for his workrate over the course of the season - truly our most underrated player.

Now we have a week to prepare for our next game away at Stoke - never an easy place to go, but three points are required again.

Olivier Giroud marked his return to the Arsenal side with a brace as Sunderland were beaten 4-1 in the Barclays Premier League.

The France forward - who was left on the bench for the last two matches following a dip in form and some unwanted headlines about his private life - scored twice in the first half as the Gunners put the midweek Champions League defeat to Bayern Munich behind them. Club-record signing Mesut Ozil was given a rest from the squad.

Sunderland, who meet Manchester City in the Capital One Cup final at Wembley next weekend, grabbed a consolation through a 25-yard drive from substitute Emanuele Giaccherini - but Gus Poyet's men remain deep in relegation trouble.

Arsenal had unveiled a bronze statute of former striker Dennis Bergkamp outside the Clock End earlier on Saturday, and their latest centre-forward, Giroud, needed only five minutes to sweep the hosts into the lead.

The ball was worked back into the middle, where Rosicky fed Jack Wilshere, whose positive run into the Sunderland box resulted in the ball falling right into the path of Giroud.

The France striker stroked the ball into the bottom left-hand corner past Vito Mannone, the former Arsenal keeper.

After their blistering start, the Gunners continued to dominate possession as Sunderland struggled to mount any serious threat.

Marcos Alonso finally got away down the left, but his low cross into the six-yard box was cut out by Wojciech Szczesny, who had been sent off against Munich for a professional foul.

Lukas Podolski let fly from 25 yards, with Mannone tipping the ball over with strong wrists.

Sunderland defender Santiago Vergini was caught under little pressure out on the far touchline, but decided to clip the ball back through the penalty area towards his keeper.

The backpass was never going to get there, but Giroud was and promptly rolled the ball under Mannone for a gifted second goal, his 12th in the Premier League.

It was now all about damage limitation for Sunderland, who remain deep in a battle for top-flight survival despite their cup exploits.

However, the visitors' rearguard was sliced open again a minute before the break.

Rosicky picked the ball up on the right, and fed it inside to Santi Cazorla, who in turn picked out Wilshere.

Another quick pass laid the ball off to Rosicky, who then exchanged a neat one-two with Giroud before darting into the Sunderland box and chipping the keeper.

Sunderland looked to regroup at the break and sent on Sebastian Larsson, another former Gunner, and Giaccherini to replace Adam Johnson and Jozy Altidore.

Arsenal, meanwhile, brought off Nacho Monreal, who had been in for the injured left-back Kieran Gibbs, and sent on Carl Jenkinson.

To their credit, Sunderland did show some fight, as Arsenal had to make a few desperate clearances at the back.

Vergini's afternoon almost got worse when he sliced a cross from Bacary Sagna into his own net, which is just where the ball ended up after the resulting corner on 57 minutes.

There was no Sunderland marking whatsoever as Cazorla's delivery floated over the six-yard box and was headed back downwards by Koscielny.

The Arsenal defender, though, would soon be hobbling off, after he looked to have picked up a thigh problem when making a tackle.

That forced manager Arsene Wenger into a defensive reshuffle on 67 minutes, as Mathieu Flamini came onto the left, with Sagna moving to the middle alongside Per Mertesacker.

Finally Szczesny was called into action when he got down well to push out a close-range effort from Ki Sung-yeung following Larsson's knockdown.

Serge Gnabry replaced Rosicky for the final 15 minutes and was soon played into the right side of the penalty area by Wilshere, but Mannone stood up to make the save.

Larsson sent a curling 20-yard free-kick just wide, but Sunderland had their consolation goal on 81 minutes when Giaccherini cracked the ball back past Szczesny from 25 yards after it had been punched out from a corner.