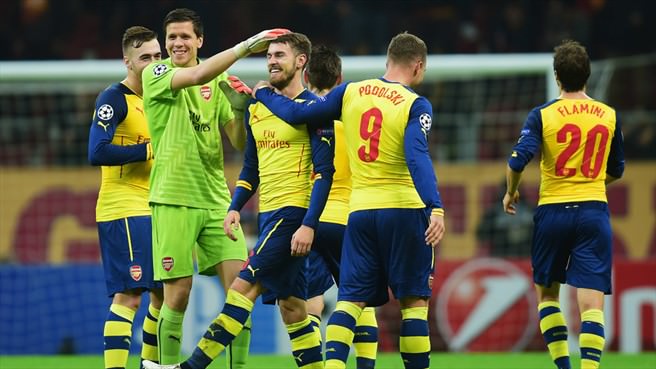 It's a funny old game - why are this team so inconsistent?

The Turks were left reeling on their home turf by a side who played with purpose and determination - a refreshing change.

Lukas Podolski - always in my mind the most natural goalscorer we have - started the game and paid back the manager with a brace of goals.

Aaron Ramsey's fantastic strike was the icing on the cake, and finished off the already deflated Gala boys.

We still end up second in the group, so could draw one of Europe's (other) elite sides in the next round. I'm looking forward to it.

Arsene Wenger had come in for abuse from the London club's own supporters in the aftermath of Saturday's disappointing 3-2 defeat at Stoke, which left them sixth in the Barclays Premier League.

However, there was no European hangover as despite leaving several key players such as Alexis Sanchez back in London, the Gunners, who had already qualified for the knockout stages, romped to a comfortable victory, but still had to settle for runners-up spot in Group D behind Borussia Dortmund.

Arsenal had raced into the lead after just two minutes when Lukas Podolski crashed the ball into the top left corner.

Galatasaray defender Hakan Balta missed a great chance to equalise when he stabbed the ball wide from six yards.

Ramsey made it 2-0 on 11 minutes with a neat finish after a quick break from Alex Oxlade-Chamberlain.

Podolski lashed another fierce shot against the crossbar, before Ramsey netted a superb half-volley from all of 30 yards which was applauded by the home supporters.

The second half was a much-more subdued affair, with Arsenal looking to counter after soaking up plenty of pressure with Per Mertesacker blocking a goal-bound shot from Umut Bulut on 65 minutes before Wesley Sneijder clipped home a late 20-yard free-kick.

Podolski grabbed a fourth on the break deep into stoppage time.

Arsenal will now regroup ahead of the knockout stages in mid-February, by which time Wenger could well have several of his injured stars fighting fit again to take on Europe's best.

Arsenal full-back Mathieu Debuchy returned following three months out, while Wenger named a bench with an average age of just over 18, handing an opportunity to fringe players such as Podolksi, Yaya Sanogo and Joel Campbell.

It took German forward Podolski some 122 seconds to prove his point, as he lashed an angled drive the ball past Sinan Bolat from just inside the penalty area.

Galatasaray, who sacked Cesare Prandelli following four successive Champions League defeats, looked to quickly respond, the fans who had bothered to turn out at the Turk Telekom Arena did their best to lift the home side.

Hakan Balta dragged his shot wide from six yards after a corner was not properly cleared, and Arsenal then doubled their lead on 11 minutes.

Tarik Camdal looked to have been tripped by a back-tracking Podolski, but Spanish refree David Borbalan waved play on.

Alex Oxlade-Chamberlain was onto the loose ball in a flash, driving forwards to the edge of the Galatasaray area before slipping in Ramsey, who stroked in a low finish to the far corner.

Podolski was inches away from cracking in a third when another fierce left-foot effort cannoned off the top of the crossbar after more good work from the busy Oxlade-Chamberlain.

Arsenal continued to look dangerous on the break, with Ramsey, Sanogo and Campbell all failing to find a killer touch in the box, before Bolat turned a drive from Podolski behind.

The Galatasaray keeper, however, could do little to prevent a third Arsenal goal on 29 minutes when Ramsey lashed the ball into the top right of the net after a corner was headed clear.

With the match already over as a contest, to their credit the hosts looked to press again.

Umut Bulut glanced a header wide, before at the other end Campbell skipped clear and his angled shot was touched across the face of goal by the keeper.

Wenger decided to give the youngsters a taste of Champions League football for the second half.

The tempo of the match dropped, with Arsenal content to soak up plenty of pressure and look to counter.

On 65 minutes, stand-in Arsenal captain Mertesacker - castigated by pundit Jamie Carragher for 'abandoning ship' in the defeat at Stoke - produced a brave block to throw his body in the way of Bulut's close-range effort.

Galatasaray had a consolation with two minutes left when Dutchman Sneijder whipped a free-kick up over the wall into the top-left corner, but there was still time for Podolski to slot in a fourth for Arsenal on the break with what was the last kick of the match.

Arsenal, who blew a 3-0 lead at home to Anderlecht on matchday four, will now await their last 16 opponents in the draw - when the likes of Real Madrid, Barcelona, Paris St Germain and defending champions Bayern Munich could all yet come out of the top seed pot.