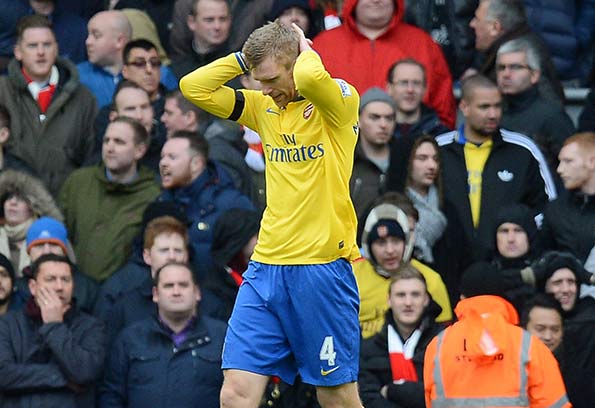 Without question the worst performance of the season, and one that will stick in the memory with all those other bad days at the office from recent seasons.

Fortunately - no matter how dire we were at Anfield - this doesn't mean that we're suddenly out of the title race. Far from it.

If you read the papers too much you'll end up slashing your wrists, but the truth is that the situation is far from hopeless. Yes it was a shocking performance, but the points reversal would have been the same even if we'd only lost 1-0 and nobody would be wailing about it.

We simply have to pick ourselves up, move on, and beat Manchester United at home. Easy eh?

Liverpool produced one of the most stunning opening 20 minutes seen at Anfield - and arguably one of the best ever - to blow away Arsenal and give their own title hopes a shot in the arm.

Brendan Rodgers' rampant Reds fired four goals before the visitors knew what had hit them, and they were incapable of finding a response.

The irony was that the league's leading striker Luis Suarez, whom Gunners boss Arsene Wenger tried so hard to sign in the summer with a cheeky £40,000,001 bid, did not get near any of them.

Suarez, who deserved a goal for a brilliant volley which beat goalkeeper Wojciech Szczesny but not the post, could claim an assist for Raheem Sterling's first of two but Liverpool were well in control by then thanks to two from defender Martin Skrtel - the first after just 52 seconds.

There was a sense of incredulity around Anfield when Daniel Sturridge caressed home the fourth with less than a quarter of the match played but for Arsenal it was more a feeling of bewilderment as an eight-game unbeaten run came to an end with Mikel Arteta's second-half penalty no consolation.

It left a question mark hanging over their ability to sustain a challenge on three fronts with Manchester United at the Emirates Stadium on Wednesday, quickly followed by Liverpool in the FA Cup and then Bayern Munich in the Champions League.

Liverpool's first home league win over Arsenal since March 2007 moved them to within five points of their opponents, who started the day with a two-point advantage over Manchester City and Chelsea at the top of the table.

Rodgers has ruled his side in - and then out - of the title race but anything close to a repeat of this form in the remainder of the campaign and he may have to reconsider once again.

An 11th home victory in 13 attempts, their best record since 1987-88, indicates where their strength lies and with Chelsea, Manchester City and Tottenham all still to come to Anfield Liverpool should be able to set their sights higher than merely securing fourth place - providing they can avoid some inconsistency on the road.

Arsenal arrived with the joint-best away record in the top flight but the dismantling of that began inside a minute.

Per Mertesacker fouled Suarez wide on Liverpool's left and Steven Gerrard's wickedly inswinging free-kick was turned in six yards out by Skrtel, although there was a suspicion of offside about it.

Full-back Jon Flanagan almost made it 2-0 on the end of a flowing move down the right involving the industrious Jordan Henderson and Sturridge but from Gerrard's resulting corner Skrtel flicked in a header over Alex Oxlade-Chamberlain on the line.

The goal doubled the Slovakia international's tally for the season and equalled his best goalscoring campaign (2011-12) for the club.

Still Arsenal were powerless to prevent Liverpool rampaging forward and when Suarez played Sturridge in the England striker should have done better with his clever chip over the advancing goalkeeper which drifted wide.

Suarez smacked a sumptuous volley against an upright from Gerrard's corner with Kolo Toure unable to divert the rebound into the empty net, but there was no respite.

Henderson robbed the anonymous Mesut Ozil on halfway. Suarez's cross from the right had Sturridge and Sterling queuing up but the latter got their first.

Sturridge was not to be denied, however, and when a trademark Philippe Coutinho through-ball sent the striker scampering between Arsenal's statuesque centre-backs a confident clip past the goalkeeper got its just reward.

A quick glance at the Anfield scoreboard showed the time elapsed was 20 minutes - Arsenal's players looked like they were already halfway home to London.

The visitors created just two chances in the first half, one via a mix-up between goalkeeper Simon Mignolet with Skrtel clearing the danger from Nacho Monreal, and the other a Mertesacker header flashed across goal.

Any fanciful hopes Arsenal had of recreating a thrilling 4-4 draw like the Andrey Arshavin-inspired one here in 2009 which contributed to Liverpool not winning the title were ended 10 minutes into the second half.

Toure's ball over the top was seized upon by Sterling, who reacted quickest when his shot rebounded back off Szczesny to make it 5-0.

Rarely is Suarez overshadowed but try as he might he could not get into the main action, with his 35-yard free-kick destined for the top corner until the Gunners goalkeeper tipped it over.

Arteta scored a penalty after Gerrard's needless foul on Oxlade-Chamberlain and was denied by Mignolet's low save from his free-kick but the game had been lost long before.