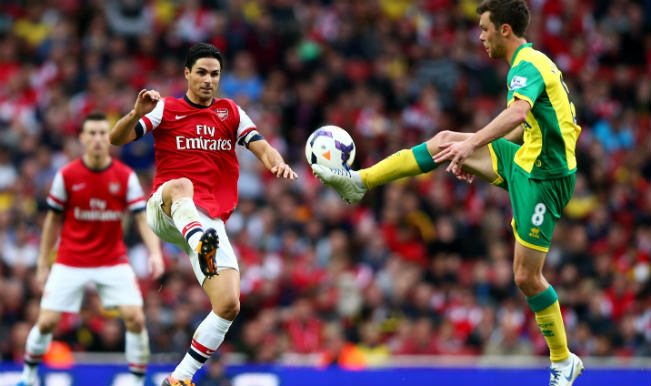 Maximum points from the last five games of the season is a respectable finish. If only we'd been consistent throughout the season.

We finished seven points behind the champions - congratulations to Manchester City - which shows how close we came to finishing on top. A little more quality cover for injured players (Walcott, Ramsey) could well have seen us lift the trophy.

Let's hope Arsene learns his lessons from this.

Ramsey really is the key man - player of the season in my book, and so the results show, essential to the team. Thank god he gets a break this summer.

Norwich's relegation from the Barclays Premier League was confirmed as Arsenal ran out 2-0 winners at Carrow Road, where England midfielder Jack Wilshere made his long-awaited return from injury.

The Canaries were already all but down - needing to win, West Brom to lose and by a 17-goal swing. Arsenal, who play in the FA Cup final next weekend, were not in a generous mood.

Norwich goalkeeper John Ruddy, hoping to be in Roy Hodgson's England squad along with Wilshere when it is named on Monday, made three fine saves in the first half before he was beaten by a fine strike by Aaron Ramsey on 53 minutes.

Defender Carl Jenkinson swept home another for his first Arsenal goal as the visitors closed out a comfortable victory ahead of their Wembley return, while Norwich, who sacked manager Chris Hughton with just five matches left, must now regroup for life in the Sky Bet Championship along with Cardiff and Fulham.

Wilshere made a welcome return to the squad following a fractured foot suffered on international duty against Denmark in March, while with fourth place already secure and perhaps one eye on the FA Cup final, Lukasz Fabianski started in goal.

Caretaker Canaries boss Neil Adams found no place in the match-day squad for club-record signing Ricky van Wolfswinkel, who managed just one goal and along with captain Sebastien Bassong - another conspicuous by his absence - looks set to leave in the summer.

With nothing other than pride to play for, Norwich - who actually had a decent home record this season - started brightly.

On 17 minutes , winger Nathan Redmond - one of the few summer buys to have performed consistently well - cut in from the left and drilled an angled shot from 20 yards which Fabianski palmed behind.

The tempo of the match, however, was soon pedestrian again, which in the circumstance of both team was understandable.

On 27 minutes, a clever backheel from Olivier Giroud in the left side of the penalty area created space for Podolski, but goalkeeper Ruddy - the England international another likely to join the summer exodus from Norfolk - was out quickly to make a smart save.

The Norwich number one then produced a quite remarkable stop after a neat one-two put Giroud clear, but the Arsenal forward's chipped drive was pushed over at point-blank range.

Arsenal were finally finding some rhythm, as another quick interchange on the edge of the Norwich box teed up Ramsey, whose snapshot was blocked by Michael Turner.

Ruddy was again called into action five minutes from half-time when he tipped over a fine curling 20-yard effort from Giroud.

There was not much more enthusiasm following the restart, before a moment of pure quality finally broke the deadlock.

Giroud held the ball up on the edge of the Norwich penalty area, before chipping a cross to the back post.

Ramsey dropped a yard deep, before volleying the ball up over Ruddy into the top-right corner for a strike of the highest technical order.

With the game, and ultimately their season, gone, Norwich handed a first-team debut to Jamar Loza, the 19-year-old forward just back from spells at Leyton Orient and Southend.

Full-back Kieran Gibbs carried the ball to the left touchline, before cutting it back into a crowded box, where Jenkinson prodded it home - before the life-long Arsenal fan wheeled away to the travelling support in wild celebration of his first goal for the club.

Wilshere then replaced Ramsey to give him a run-out ahead of the FA Cup final and a likely summer trip to Brazil.

There was also a welcome late cameo for Abou Diaby, the France midfielder recovered from a serious knee injury to play in his first match since March 2013.

Fabianski saved bravely at the feet of Robert Snodgrass, the Norwich player of the season in a forgettable campaign,

as the Gunners, already assured of a Champions League qualifying place, closed out a fifth straight league win.