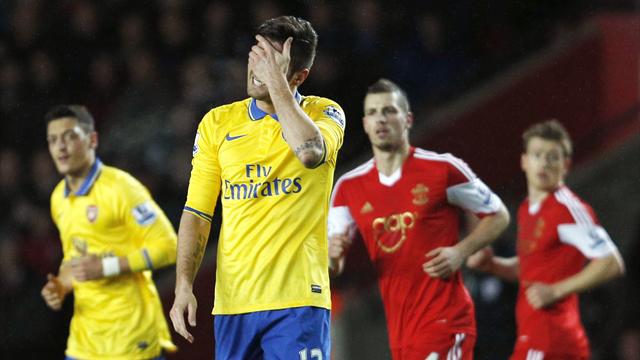 This was never going to be an easy game, but the lads made if difficult for themselves by not turning up for the first half.

Fatigue? - who knows, but any side that has title aspirations can't afford to let standards slip.

Quick goals from Giroud and Cazorla signalled a second half revival, but to their credit Southampton pressed on and deserved the draw. Some would no doubt say that they deserved all three points.

Arsenal failed to stretch their advantage at the top of the Barclays Premier League as Southampton secured a deserved point in a frenetic encounter at St Mary's.

Kicking off 24 hours before their title rivals, Arsene Wenger's side were unable to keep up the pressure on Manchester City and Chelsea as they blew what had been an impressive second-half comeback.

They were forced to settle for a point in a hard-fought 2-2 draw that ended a five-match winning streak, which means they could be usurped at the top of the standings on Wednesday.

It could have been even worse for the Gunners as they were fortunate to go in at half-time just a goal behind to a Southampton side performing impressively despite the continuing off-field headlines.

Jose Fonte has been caught up in many of those, having been on the receiving end of Dani Osvaldo's fit of rage in training, but was quick to thank the home fans on his first start since the incident as he headed Saints ahead and celebrated by beating the club badge passionately.

Sam Gallagher, making his full debut at the age of 18, should have doubled the hosts' advantage soon after when a Nacho Monreal clearance fell fortuitously into his path, allowing the Gunners to turn the match on its head at the start of the second half.

Just three minutes after the restart, Bacary Sagna met an over-hit cross on the right flank and struck a low goalbound strike, credited to Olivier Giroud thanks to the faintest of touches.

It was the Frenchman's fourth goal in five matches in all competitions - a record Santi Cazorla bettered in the 52nd minute with a fine strike from the edge of the box to make it five in five.

The hosts would not lie down, though, and showed impressive resolve to strike back within two minutes, as Adam Lallana fired home a Jay Rodriguez cutback to make Saints just the second side to score more than one against Arsenal in their last 22 league games.

Wenger's men do not have the joint-best away record in the top flight for no reason, though, and came close to going back in front when a Mesut Ozil shot deflected off Fonte and looped on to the crossbar.

However, hopes of eking a late victory took a major blow as Mathieu Flamini was deservedly handed a straight red card for a two-footed lunge on Morgan Schneiderlin, meaning Arsenal had to weather the storm in the closing stages.

Saints began the match impressively, knocking the ball around confidently and dominating possession in an entertaining first half.

Arsenal were lacking fluency and, after bundling wide a Luke Shaw cross after Per Mertesacker failed to clear, debutant Gallagher then stung the palms of Szczesny.

Wenger's side were being pegged back in their own half as Saints continued to press and their endeavours were rewarded in the 21st minute.

The ever-impressive Shaw whipped in a cross from the left and Fonte beat Monreal at the back post, with the centre-back's powerful header too much for Szczesny to claw away.

Arsenal claims for a foul on Monreal were waved away and they were soon on the back foot again, with a Lallana strike whizzing just wide after a Flamini deflection.

There were a few hopeful penalty shouts from the Gunners when Fonte's acrobatic clearance went against his own hand, but play continued and Saints came close again at the other end.

Monreal's byline clearance deflected wickedly off Steven Davis and into the six-yard box, where Gallagher met the ball but could only prod wide.

The teenager was proving a nuisance on his full debut and had another chance with half-time approaching, collecting the ball after neat team interplay and only being denied by a last-gasp Laurent Koscielny interception.

The France international almost made another telling impact at the other end before the first half was brought to a close, only for a wonderful Artur Boruc save to deny him from a corner.

They would not be denied for long, though. Three minutes into the second half Arsenal were level as Sagna met an overhit cross on the right-hand side of the 18-yard box and his low strike went in thanks to a feint touch off Giroud.

The strike was just the beginning of a remarkable start to the second half, with Arsenal turning proceedings on its head in the 52nd minute.

Smelling blood, the north Londoners poured forward and Ozil's pass was left by Giroud for Cazorla to fire a left-footed strike out of Boruc's reach.

It was a wonderful strike by the Spaniard, although Arsenal's lead lasted less than two minutes.

While many sides could have crumbled, Saints responded impressively. Rodriguez latched onto a ball down the left flank and pulled back for Lallana, who struck low through Szczesny's legs to pull his side level.

The frantic tempo continued after the leveller as both sides went in hunt of a winner.

Giroud headed away a threatening Schneiderlin effort, before Ozil broke at pace from his own half and rode an attempted foul to get away a shot that deflected off Fonte and looped over Boruc onto the crossbar.

It was a lucky escape for the hosts, who ended the match on top after Flamini's over-zealous challenge on Schneiderlin was met by a straight red card.

Szczesny did well to deny late Shaw and Fonte efforts in the closing stages, with Arsenal escaping the south coast with a point.