Spurs 2 Arsenal 1 - A poor show from the lads 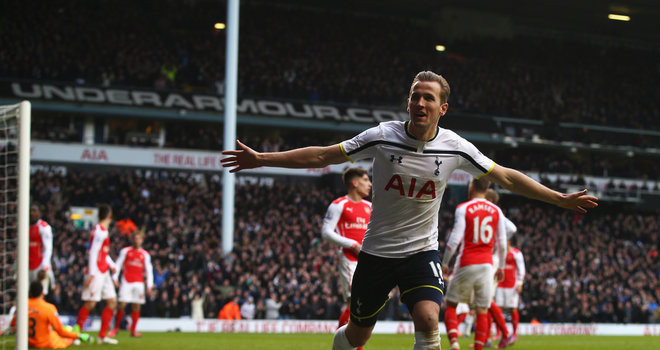 We went into this game in a great run of form but we're The Arsenal, so we all know that consistency can be hard to come by.

We even took the lead - a great opportunist finish from Mesut Ozil - and despite the fact that Spurs closed us down in midfield and stopped us playing, we were looking comfortable.

It all went downhill from there, thanks to the special talent that is Harry Kane.

We had no answer, and the introduction of Rosicky and Walcott made precious little difference.

Time to pick ourselves up and move on - this battle for fourth is going to be hard fought.

Arsene Wenger's side made the short, four-mile journey to White Hart Lane looking to secure a sixth successive victory and dampen their bitter rivals' hopes of a top-four finish.

An early Mesut Ozil volley put Arsenal on course for just that, only for Spurs to produce a thrilling, and deserved, comeback, with Kane's second-half brace securing a 2-1 win.

The victory saw Spurs leapfrog the Gunners in the Premier League standings as they again displayed their growing resilience, like the unforgettable New Year's Day annihilation of Chelsea.

Just 11 minutes were on the clock when Arsenal made the breakthrough, with fine play by the returning Danny Welbeck ending in a cross flicked into the path of Ozil to volley home.

It took 15 efforts of differing quality for Spurs' pressure to finally tell, with Kane the man to do the damage, directing home at the far post after an Erik Lamela corner caused havoc.

Mauricio Pochettino's men were bossing possession and, just as it appeared the match was heading for a draw, Kane wonderfully headed home at the far post to send the home fans into raptures, securing a memorable win.

The early minutes set the tone for this encapsulating encounter, with Kane coming close to a fifth-minute opener, cutting onto his right and producing a curling effort which David Ospina did well to tip around the post.

The Colombia goalkeeper appeared to pick up a knock in the process but was deemed fit to continue and soon had his palms stung by a Danny Rose cross.

Spurs were bright but, just like the corresponding fixture last season, Arsenal struck an early blow.

The returning Welbeck launched a rapid counter attack down the right flank, with his cutback flicked on by Olivier Giroud and volleyed home by Ozil.

It was quite a goal and one Spurs responded well to, with Rose forcing Ospina into action with a low drive as they searched for an immediate riposte.

There was a nervy moment at the other end when Ryan Mason handled but referee Martin Atkinson waved away penalty appeals.

Nabil Bentaleb came close and Rose slammed a low effort just wide of Ospina's goal, which was tested once more when Mason sent a 25-yard strike towards the top right-hand corner.

Christian Eriksen and Lamela hit wayward efforts as the home side's push continued, with Kane firing wide shortly after becoming the first player of the match to be receive a yellow card.

The England Under-21s striker was proving a handful and, unaware the offside flag was raised, struck wide of the post at the end of first half which saw Nacho Monreal and Welbeck booked.

Spurs continued in the ascendancy after the break as, aside from a Santi Cazorla effort, the visitors were penned back.

Lamela's corner from the right was flicked on by Dembele and Kane fired home at the back post after Ospina saved the initial effort.

Inspired by the increased volume, Dembele wriggled free and sent a low shot which Ospina parried and Kane just could not turn home.

Not for the first time this season, though, Spurs had their goalkeeper to thank at the other end.

Firstly, Hugo Lloris produced a fine one-handed save to push a curling Welbeck effort wide, before saving a powerful header from the unmarked Koscielny from the resulting corner.

Hector Bellerin cleared an Eric Dier header off the line when Spurs returned to the attack, before Ospina did well to stop a low Bentaleb effort sneaking home.

A great defensive clearance by Rose allowed Spurs to attack, with Eriksen winning a free-kick which he whizzed just over the bar.

The game became an edgier affair as the match entered the final 15 minutes and there were suggestions Per Mertesacker should have had a penalty for appeared to have his shirt tugged.

The match was on a knife edge and would be decided by that man Kane. Bentaleb clipped a wonderful diagonal ball to the Spurs striker, who impressively directed his header into the far corner to the delight of the home fans and no doubt onwatching England manager Roy Hodgson.

Arsenal pushed for a late leveller but the Spurs backline held firm, securing a first win against their rivals since March 2013.