6 Moments Backroom Staff Stole the Limelight & Made the Headlines

​Backroom staff are often the engine room at a football club. They rarely do interviews, are scarcely seen away from the touchline, and often shy away from the limelight.

But every so often they are given a brief moment to shine - for better or for worse.

So let's take a look at the occasions when those who feature prominently behind the scenes make the back pages, and not always for the right reasons.

Spoiler: a lot of these concern a certain team from west London. This incident is one of the most famous in Premier League history. Chelsea, who would struggle in the league during the 2015/16 season, were in a scrappy encounter with Swansea at Stamford Bridge on the opening day. It was 2-2 with moments left in the match when Eden Hazard went down injured, with Thibaut Courtois already sent off.

Naturally, on ran Eva Carneiro and physiotherapist Jon Fearn to treat him. Chelsea manager Jose Mourinho was furious, gesticulating angrily from the touchline that Hazard only had a knock.

The manager would later scale down Carneiro's duties so that she no longer featured on the bench on match days. She later left the club and pursued a case of constructive dismissal. Mourinho was found not guilty of using abusive language towards Carneiro by an FA tribunal, but it was the doctor who came out of the whole affair with far more support. 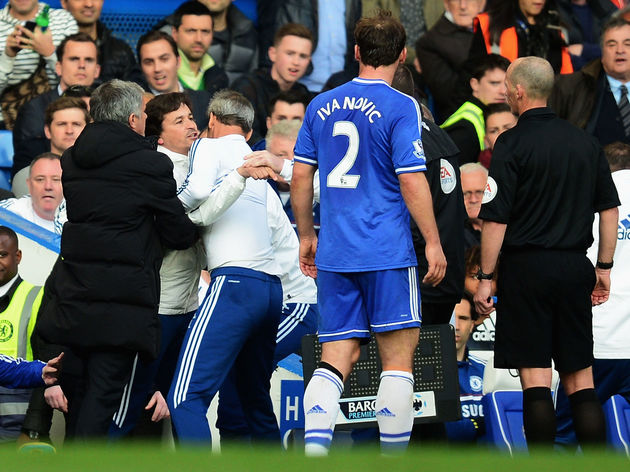 ​Mike Dean does have a habit of angering managers and players with his unpredictable antics, but occasionally he irritates even more than that. Chelsea

Rui Faria, who is often the model of calmness next to Jose on the bench, leapt up and confronted first the fourth official and then Dean. It made great television; the diminutive Faria giving an earful to the one referee many wish they could shout at themselves. Mourinho remarkably played peacemaker and restrained his assistant. 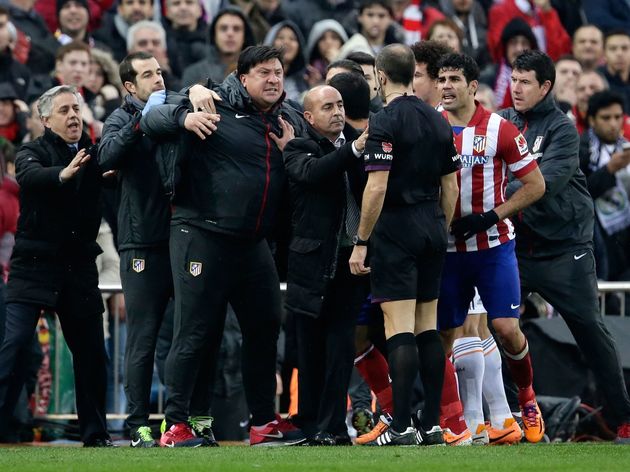 We move to Spain for this memorable backroom moment. It's 2014 and Atlético Madrid are hosting city rivals Real in an ill-tempered match, and Diego Costa has just been booked for simulation.

Step forward 'El Mono', a beast of an assistant coach.

Aside from football, Burgos had a fledgling heavy metal career in the mid 1990s. If you don't believe that, his music is online, so you can understand for yourself the reason behind his rather 'all guns blazing' reaction that night. 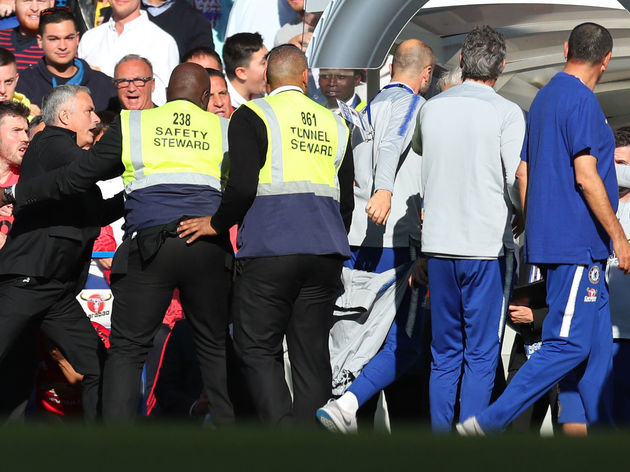 Another memorable Mourinho moment, though this time not instigated by the current Tottenham boss. Mourinho was returning to Stamford Bridge with Manchester United and his side were 2-1 up with moments left in the match.

Ross Barkley equalised for the Blues in the last minute of stoppage time, causing Maurizio Sarri's assistant Marco Ianni to leap from the bench and run past Jose gesturing animatedly. Mourinho didn't take kindly to a taste of his own medicine - Porto vs Manchester United in 2004, anyone? - and angrily retorted before the two men were eventually separated.

After the heat died down, Ianni was fined £6,000 and the pair shook hands later behind closed doors. It was a timely reminder, however, of the bad blood still lingering between Mourinho and his old club. This a classic from 2009. Mike Phelan, the long serving assistant coach to Sir Alex Ferguson, grabbed a stray balloon that had drifted into the Manchester United dugout at Stamford Bridge. Instinctively, he popped it with his studs and sent his boss absolutely crazy. Perhaps unsurprisingly, Phelan later said the incident nearly cost him the job. And finally, one of the best moments in the FA Cup ever. In 2017, larger than life goalkeeping coach Wayne Shaw - who was also the back-up goalkeeper on the night - was in the Sutton United dugout as they took on ​Arsenal for a place in the quarter finals.

With ten or so minutes remaining, Shaw grabbed a pasty and began to chomp away. Commentators couldn't believe it and neither could those who were watching at home. It all seemed too surreal.

It later emerged Shaw had known about favourable pie-eating related odds circulating, which left him in a heap of trouble. He left Sutton off the back of the incident and was later banned by the FA for his indiscretion. He was, however, offered a job as a pie taster by a leading supermarket, so it wasn't all bad news.