​The fact that he is leaving in the first place is sad enough, sickening even, for the vast majority of Gunners' fans. So when supporters received the news that Aaron Ramsey has been ruled out for the remainder of the season, it rubbed salt into already salty wounds. Really salty wounds.

Arsenal's Welsh wizard has divided opinion throughout his near 11-year career in north London, but none could ever question his commitment to the cause or staying true to his own ideals of  playing football the 'beautiful' way.

He himself ​confirmed the news in a heartfelt letter to supporters on his Instagram, with only the most cold-hearted ​Arsenal fans able to keep a dry eye. Now it's over, with hopes of a final game for the club involving lifting the Europa League trophy a mere dream, it's time to reflect. With a player who has spent over a decade at a single club there is plenty of room for reflection, therefore choosing eight best moments was a breeze. It was a season of majesty for Ramsey, simply unplayable throughout the campaign​, it all culminated in an FA Cup final against Hull City at Wembley.

The game itself started like wildfire, with Hull going two goals up inside the opening eight minutes to stun Arsene Wenger's men. While the Gunners are FA Cup experts, they hadn't been successful in the competition for a while, and the final was their best chance of ending a torrid nine-year wait for silverware, against opposition everyone expected them to turn over.

After clawing their way back to 2-2, the game went into extra time. But there was only going to be one match-winner, given the scintillating form he was in. And he did not disappoint. No he did not. A well worked move saw ​Olivier Giroud lay the ball off for Ramsey in the box with a cute back heel, and the midfielder nonchalantly slotted it into the bottom corner with the outside of his right boot. Scenes, absolute scenes. The wait was over. 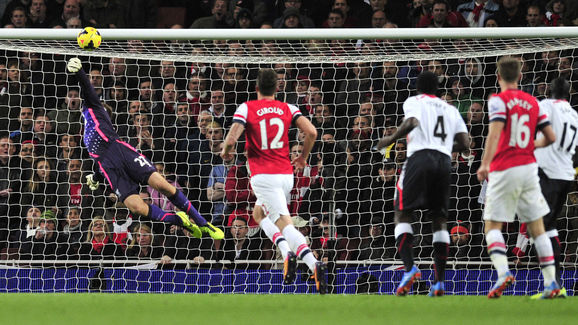 When I said he was unplayable that season, I really mean it. He was brilliant.

A highlight of that 2013/14 season was his sublime half-volley against ​Liverpool that​ had temporarily put Arsenal five points clear at the top of the ​Premier League, which is just bizarre to even write let alone think about.

Ramsey secured three points at the Emirates in stupendous fashion in the second half. After collecting ​Mesut Ozil's pass on the edge of the box 25 yards out, he let the ball bounce twice before unleashing a superb strike beyond the reach of Simon Mignolet and into the far corner. While great goals live long in the memory, it's his title winning moments that will forever etch Ramsey into Gunners' folklore. Thing is, he did it twice.

After ending the club's horrendously long wait for a trophy in 2014, he then put Arsenal in FA Cup history books with the winning goal in the 2017 final against ​Chelsea. Having been pegged back to 1-1 by their ten-man opponents, time was running out. With less than 15 minutes left to play, Arsenal went straight up the other end where Giroud (that man again) crossed for Ramsey (also that man again) to head home and send the Red Army into delirium. In the process, earning them their record-breaking 13th FA Cup title. Goals were certainly a part of his game, but certainly not the trait most commonly attributed to a midfielder. However, it was somewhat surprising that it took Ramsey until just last year to score his first career hat trick.

It came in a 5-1 thumping of ​Everton in February 2018, the first a close range finish, with the second a long-range effort that deflected into the Toffees' net. His well-taken third made him become the 20th player to net a Premier League hat trick for the club.

Making Supporters Believe 'We've Got Our Arsenal Back' It's a goal that will surely be among to contenders for the best of this current league season. Having just come on the pitch moments before, R

Throwback to Aaron Ramsey's screamer against Galatasaray which won Arsenal's 2014/15 Goal of the Season award. pic.twitter.com/uzfTyFqhqw

It was a ​Champions League group match against Galatasaray, and Ramsey was 35 yards out.

Little needs to be said about this goal. Just sit back and enjoy. Because quite frankly​, words fail to adequately summarise the sheer brilliance of the technique. Sumptuous.

Performances Against Their Bitter Rivals Stepping up to the plate in big games tended to be something of a forte for Ramsey. While the Welshman is Cardiff boy, to say his heart isn't even the faintest bit red would be a lie. He loved scoring against ​Tottenham, it was etched across his face every time he did.

The best of the bunch came at White Hart Lane, where he demonstrated similar skill ​to his strike against Fulham to open the scoring back in 2016 to completely bamboozle Hugo Lloris. Superb technique.

His Solo Effort at Home to Norwich This gets a mention because the player himself has repeatedly stated it was his favourite goal for the club. He collected the ball from Jack Wilshere in the box before a fine first dummy sold two Canaries' players, leaving him with​ a chance to shoot on his unfavoured left. Opting against it, he sold another man with a second dummy before firing past the helpless John Ruddy into the net.

Ice-cool composure and ability that became the trademark for his 2013/14 season. I told you, unplayable.