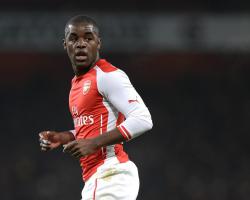 The Yellow Submarine confirmed on Twitter that a deal had been agreed on Saturday evening, shortly before their Primera Division match against Levante kicked off at El Madrigal

"Transfer agreed in principle with Arsenal for Gabriel, who will bid farewell before the game

Much luck!" the club posted

"Welcome @ joel_campbell12! Agreement reached with Arsenal until the end of the season."

Villarreal wanted to see the 20million euros (ÃÂ£15.25million) release clause activated, while the Gunners ere said to be offering in the region of ÃÂ£10million, following add-ons to an initial down payment

As such, Arsenal will need to convince a Football Association hearing that the player is an ''exceptional talent''

The changes, backed by Football Association chairman Greg Dyke, would see the current requirement of a player having taken part in 75 per cent of internationals over the past two years if their country is ranked within the top 70 tightened, but also allow an exception for any transfers over ÃÂ£10million

Wenger has long championed the complete freedom of movement for talented players, no matter what their passport says, and believes there is an argument to make football a special case to scrap all the government red tape

''Ideally it would open completely, and anyone can come in," the Frenchman said on Thursday, at his press conference ahead of Sunday's FA Cup tie at Brighton

''We had identified (Angel) di Maria when he was 17

Why? Because he could not get a work permit (for England), so that means you can only get him to England once he is worth a huge amount of money

The north London side have been regularly left short of defensive cover this season with the likes of Laurent Koscielny, Kieran Gibbs, Nacho Monreal and Mathieu Debuchy all suffering injuries

Debuchy is expected to be out for another three months after undergoing surgery on his right shoulder, leaving Wenger with only six fit senior defenders at the club

''We can cope because we have (Calum) Chambers, (Per) Mertesacker, Koscielny,'' Wenger said earlier this month

''So if we have another injury or two we will struggle