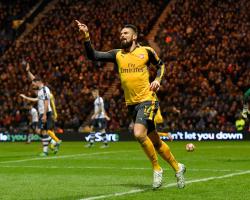 Giroud continued his recent scoring streak by netting his fourth in four games since returning to the starting line-up, sinking the impressive Championship side with a deflected 89th-minute effort in the third-round tie at Deepdale.

The striker has spent most of the season so far on the bench, but since putting a late winner past West Brom on Boxing Day he has hit a stunner against Crystal Palace and a vital equaliser at Bournemouth.

Manager Wenger is pleased how his fellow Frenchman has responded to being left out for a prolonged spell and was happy to hand him the captain's armband as one of the senior figures.

Wenger said: "He has scored many goals recently

Everybody contributes and he's in good form at the moment

It's been goal after goal.

He's shown leadership qualities and that's why he was captain."

Wenger admitted he was not happy with the performance of his players in the first half.

Preston ran their illustrious visitors ragged for 30 minutes and were unlucky not to lead by more than Callum Robinson's early strike after creating a host of chances.

They equalised with a fine goal from Aaron Ramsey soon after the restart and played with more intent before their extra quality told late on.

Asked if he was angry, Wenger said: "Yes, at half-time

We are at the top level in the Premier League and we were dominated.

Preston were organised and were quick in the transition

We were in trouble every time.

"They played in a very intelligent way

They are a good side, I was really impressed."

He told BT Sport: "We want to start the games better

They put a lot of intensity in the duels and all the team was beaten, so it was not Arsenal.

"We wanted to come together in the second half

We need to start the game better."

Preston manager Simon Grayson felt the least his side deserved was a replay.

Grayson said: "It was difficult to speak to the players after the game and know what to say.

"I am extremely proud of the way we played, we made a very strong team look ordinary in the first half.

"We wanted to try to win a match, or at least draw, and we are disappointed we conceded so late.

"It wasn't what we deserved

Nobody would have begrudged us if we'd won or drawn because the performance in the first half was as good as I've seen since I've been here."