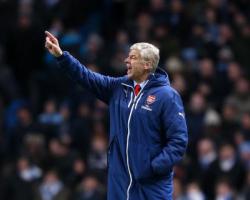 The Barclays Premier League club confirmed the move for the 17-year-old on their official website, with a fee in the region of ÃÂ£2.5million said to have been agreed.

Poland youth international Bielik, who also had talks with German club Hamburg, is expected to work initially within the Gunners' Under-21s side, with a view to a swift progression through to the senior squad.

A statement from Arsenal read: " Arsenal have completed the signing of 17-year-old midfielder Krystian Bielik from Legia Warsaw for an undisclosed fee."

Bielik, who made his senior debut for Legia at the age of 16, has made six appearances for the club, and can play in both midfield and defence.