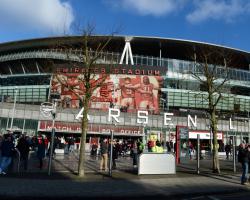 The Arsenal Supporters' Trust (AST) held an open meeting on the subject on Monday night, with members of the Football Supporters' Federation and English Football League in attendance.

There have been calls from across the Premier League to introduce safe standing areas after all-seater stadia became regulation following the Taylor Report recommendation - in the aftermath of the Hillsborough disaster.

Reigning Scottish Premiership champions Celtic have introduced safe standing measures at Celtic Park, and AST now want Arsenal fans to give their own opinion on the matter to both the club and the Premier League.

"On Monday evening the AST held an open meeting on safe standing," a statement on AST's website read

"This meeting was addressed by guest speakers from the Football Supporters' Federation (FSF) and (English) Football League.

"The meeting heard about the progress that is being made in considering options to return to safe standing and that the Premier League is soon to conduct some formal research and consultation into the subject.

"This work will include discussion with supporters' groups, building on a meeting the AST had with the Premier League chief executive last summer when we urged him to review the issue

This debate follows the successful introduction of safe standing by Celtic Football Club.

"This survey is open to all Arsenal fans and we are hoping for a large response so that we can represent the views of as many people as possible on this important topic."

Manchester United fans will also broach the subject with their club after an announcement on reducing the capacity at Old Trafford to comply with accessibility guidelines was made on Tuesday.

"We hope this redevelopment will provide a perfect opportunity to conduct a trial of rail seating ("safe standing") and this is something we'll be raising with the club as well," a Manchester United Supporters Trust statement read.