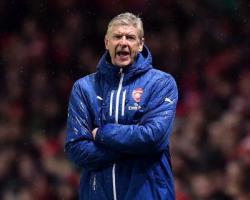 Arsenal, though, are said to be offering in the region of ÃÂ£10million, which would be following add-ons to an initial down payment.

While Wenger is cautiously optimistic a suitable agreement can be brokered, the Gunners boss accepts clearing red tape from the Home Office could be more testing given Gabriel does not meet the automatic requirements because he is not yet a full senior international.

Speaking at a press conference ahead of Sunday's FA Cup tie at Brighton, Wenger confirmed: "We are talking at the moment, can we find an agreement or not? I don't know

We are slowly progressing, but there is a chance.

"We are ready to pay the price we think is right for a good player, no matter what the price is

If we think it's the right price we will pay."

Because Gabriel has failed to meet the international quota and is not a European Union citizen, he would have to be granted permission to work in the United Kingdom.

Arsenal, therefore, would need to convince a Football Association hearing, which is run on behalf of the Home Office, that the Brazilian was an "exceptional talent" - as they successfuly did in the past with Japan's Ryo Miyaichi and Brazil-born Croatian Eduardo da Silva, a move which was granted on appeal in August 2007.

"If a player we want needs a work permit then we will defend it now because we will not necessarily want to do it in the summer," said Wenger, who on Wednesday completed the signing of promising teenage Poland midfielder Krystian Bielik from Legia Warsaw.

"We are short at the moment so no matter what the rules are, we have to do it now.

"We respect the rules in England

When you buy a player who does not fulfil the criteria and needs a work permit, you go in front of a commission and they tell you yes or no

We will accept that.

"Afterwards are the rules right or not, that can be discussed

At the moment the rules are like that, you have to go in front of a committee for a work permit.

"I think the 75 per cent rule (of internationals) as well can be questioned, because it's much more difficult to make 75 per cent of games for Brazil than it is for Luxembourg.

"It is very difficult to make a rule that satisfies everybody."

When asked if the proposed purchase of Gabriel would signal the end of the club's transfer business, Wenger replied: "Not necessarily, no."

FA Cup holders Arsenal head to Brighton for Sunday's fourth-round tie with confidence renewed following an impressive 2-0 win at Manchester City which saw them close on the top four of the Premier League.

The likes of Theo Walcott and Mesut Ozil could both start following their comeback from injuries.

England forward Danny Welbeck, however, remains out with a thigh problem

Wenger revealed the club had offered a new contract to the 23-year-old, who was on loan at Charlton earlier this season.

"Coquelin is a very young player

You look just at what happens on the pitch

Win the ball and make a good pass, in his position that is important," said Wenger.

The future of midfielder Abou Diaby, however, is uncertain following another injury lay-off for the France international.

"At the moment he is not in a position where he will be able to play soon because he is not on the field at all," Wenger said.

"I will have have a decision to make about his contract, yes."