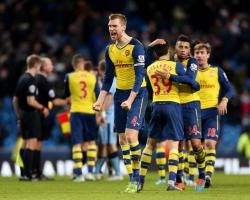 Santi Cazorla scored from the penalty spot and set up Olivier Giroud for a 67th-minute header on Sunday as Arsenal registered a first away win against a team defending the Premier League title since May 2002.

As well as leaving City five points adrift of leaders Chelsea in the title race, the result took Arsenal to within a point of the Champions League places and Wenger called on his players to build on their display.

Asked if it could prove a significant victory, the Frenchman told his post-match press conference: "Time will tell

What is for sure is that it increases the level of belief and confidence.

What you make of that will of course decide our season

Games like that can help (you) to do very well."

Cazorla's performance earned warm praise from both his team-mates and his manager, with Aaron Ramsey describing him as "different class" and Wenger branding the 30-year-old Spaniard "superb".

"Since Cazorla plays centrally -- he has played a lot wide -- I think now he's at a level of his career where centrally he can have more influence," said Wenger, whose team visit Brighton and Hove Albion in the FA Cup this weekend.

"He is fantastic because he gets you out of pressure in very tight situations and finds openings that are very interesting.

I think it's a vital quality for a midfielder today.

"On top of that, he always likes to have the ball

He passionately loves the game."

Arsenal were dealt some humiliating away defeats last season, losing 6-3 at City, 5-1 at Liverpool and 6-0 at Chelsea in Wenger's 1,000th game at the club, but they defended with discipline and resilience on Sunday.

With Alexis Sanchez and Alex Oxlade-Chamberlain tucking in from wide positions, Arsenal succeeded in smothering City's midfielders, and Ramsey felt it was the key to their success.

"We felt like in the past we were too open, but today (Sunday) we definitely defended as a team and did not give any room in the middle for David Silva to get into those little pockets he loves," the Welshman told Sky Sports.

"We forced them wide and we dealt with it

And obviously we took advantage of our chances going forward."

City manager Manuel Pellegrini was left to rue the moment mid-way through the first half when fit-again captain Vincent Kompany conceded a penalty by stepping across the path of Arsenal left-back Nacho Monreal.

"I think it was not a penalty," said the Chilean, whose side badly missed the muscular promptings of the absent Yaya Toure, who is at the Africa Cup of Nations with Ivory Coast.

"The movement of Vincent was unnecessary

But I don't want to have the excuse that the referee whistled for Arsenal."

Pellegrini attributed City's defeat to an absence of invention in possession and called for an improvement ahead of his side's showdown at Chelsea on January 31.

"The game we must play at Stamford Bridge is a very important game," he said, following his side's first loss in 15 matches.

"We must close the gap again to two points

We'll see in that game what will happen, but I hope that we are going to recover the way we are playing so far, except this game.

"We run a lot and we work a lot and we are a very aggressive team without the ball, but with the ball we didn't have the ideas."