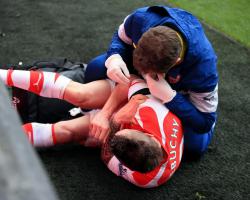 In a statement on their website, www.arsenal.com, the Gunners said Spanish midfielder Arteta's latest spell on the sidelines would be for "approximately three months" after the Spain midfielder underwent ankle surgery.

Arsenal said Arteta had had a bony spur that was causing him discomfort removed from his left ankle, adding: "The procedure went well and Mikel will now begin a period of rehabilitation which is expected to last approximately three months."

Arteta, 32, has not played for the London side since damaging a calf in the 2-0 Champions League win at home to Borussia Dortmund on November 26.

I have just seen him, he is back with us at the training ground.

"That meant we had to make the decision to have surgery and it's a proper solution which gives him the best chance to recover," the Frenchman explained.

There was more bad news for Arsenal when Wenger said later Thursday that France full-back Debuchy, who suffered a dislocated shoulder following a shove by Marko Arnautovic in Sunday's 3-0 win against Stoke, was also facing three months on the sidelines

"Mathieu had a surgery on his right shoulder following the injury on Sunday," said Wenger.

"It's very unfortunate for Mathieu, it's unbelievable because he's had two surgeries in the same season

"He just came back, he played seven games and he's out again

I count three months out for Mathieu because contact will be a problem for the shoulder."

Debuchy has made only nine league starts since joining Arsenal from top-flight rivals Newcastle in pre-season and confirmation of the extent of his injury on Thursday means he is set for his second prolonged absence this term after three months out following ankle-ligament surgery in September.

Danny Welbeck hasn't featured in Arsenal's last three matches because of a thigh problem and Wenger dashed hopes the England forward would return for Sunday's fixture away to Premier League champions Manchester City, although he was more upbeat regarding Gibbs.

His news is positive," Wenger said.

"Danny Welbeck is not ready yet, he is still feeling some pain, so we will have to be patient."

Arsenal are presently fifth in the table, just a point off a Champions League place.