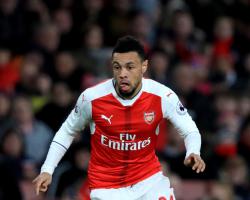 Coquelin was replaced after just 28 minutes during the Gunners' 3-3 draw against Bournemouth on Tuesday.

Arsene Wenger said the Frenchman would be out for three to four weeks at his press conference on Thursday morning.

Wenger hinted that striker Danny Welbeck, who has not featured so far this season due to injury, could return in the FA Cup third-round tie at Preston on Saturday.

He also said that the club were monitoring the fitness of Spanish forward Lucas Perez, who has an ankle injury.

Wenger also responded to reports in Thursday morning's national press that star striker Alexis Sanchez had sat in silence after the draw with Bournemouth, refusing to join in the team's celebrations at coming back to take a point.

Sanchez had hurled his gloves to the floor in frustration at the end of the game at the Vitality Stadium and it was reported that he remained deeply unhappy in the dressing room.

But Wenger had no problem at all with the Chilean's behaviour.

"What is surprising? We want to win the games, if you don't you're not happy

That is normal," he said.

It is exceptional and you need a special response.

"We are all frustrated

Of course he (Sanchez) is fine."