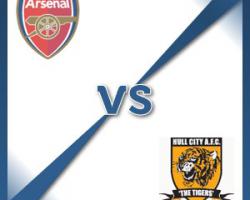 Arsenal V Hull - view commentary, squad, and statistics of the game live.Wenger keen for more silverwareManager Arsene Wenger would not have walked out on Arsenal if they had lost the FA Cup final last season, and is determined to do all he can to deliver another open-top bus parade around Islington in the summer.The Gunners host Hull on Sunday in a repeat of what was a dramatic clash at Wembley in the May sunshine, when Wenger's side battled back from trailing 2-0 inside eight minutes to win with a stoppage-time goal from Aaron Ramsey which ended a nine-year quest for some silverware.Wenger went on to sign a new deal following his side's Wembley triumph, the euphoria which greeted it having seen the Arsenal players on their knees at the final whistle and then some 250,000 supporters turn the streets around the Emirates Stadium into a sea of red and white as the French coach held aloft the famous old trophy once again.The Arsenal manager, though, insists quitting was never on his mind, no matter what the outcome had been that afternoon some eight months ago."Walk away? No

I do my job as well as I can and I respect my contract," said Wenger."It (sense of relief) was because we didn't win a trophy for years and people want that."Also, after being 2-0 down after 10 minutes and they nearly scored the third goal, you know that you have very little chances of winning, so the fact that we were 2-0 down and turned it around was a fantastic relief."It was nice to see our fans happy and it shows you how happy the club is when you win."We want another cup run and we want to, if possible, keep the trophy

We have won it five times in my period (in charge) so that means we know the importance that it has."Wenger continued: "It is a great memory, but we have a big job to do on Sunday and (after) come back in the Premier League, then we have the Champions League."What is for sure is that we have room for improvement and we have to manage to do that quickly."With on-going injury problems and the suspension of forward Olivier Giroud, Wenger has few options to rotate his squad.Harry Maguire may not have been at Hull when they made last season's FA Cup final but the defender did enjoy his own share of unexpected success in the competition.Sunday sees the Tigers take on their Wembley conquerors Arsenal - a game Maguire had his own designs on at Sheffield United.The League One side were last season's surprise package, taking top flight scalps in the shape of Aston Villa and Fulham before reaching the semi-finals with victories over Nottingham Forest and Charlton.Maguire, 21, was a central figure in that run, which ended as the Blades went down 5-3 to his current employers in the last four."I wanted Hull to win the final after they beat us in the semi," he said."They got into a great position (2-0 ahead) but unfortunately just couldn't see it through."We know it will be another tough game at Arsenal but there's nothing better than going there on the back of beating Everton, so hopefully we can match it with another similar performance and get something out of it."Should Maguire feature at Emirates Stadium it would mark quite a rise.Having jumped two divisions he was given plenty of time to settle at Hull and two substitute appearances in the past fortnight represent his entire Premier League career to date.But with injuries to Michael Dawson, Liam Rosenior and Andy Robertson leaving City light at the back, he may come into the reckoning if Curtis Davies or Alex Bruce require a rest."I could have gone out on loan a month ago but I wouldn't have been in the position I am now

It's turned out well," said Maguire."I have had to be patient but with those three injuries now I have my chance to show that we have a big squad that can cope."I had quite a few offers to go out and get a month's worth of games but Steve said he wanted me to stay here and train with Premier League players and I feel that even though I haven't been playing games I am already a better player for it."I want to show I can step up to it."